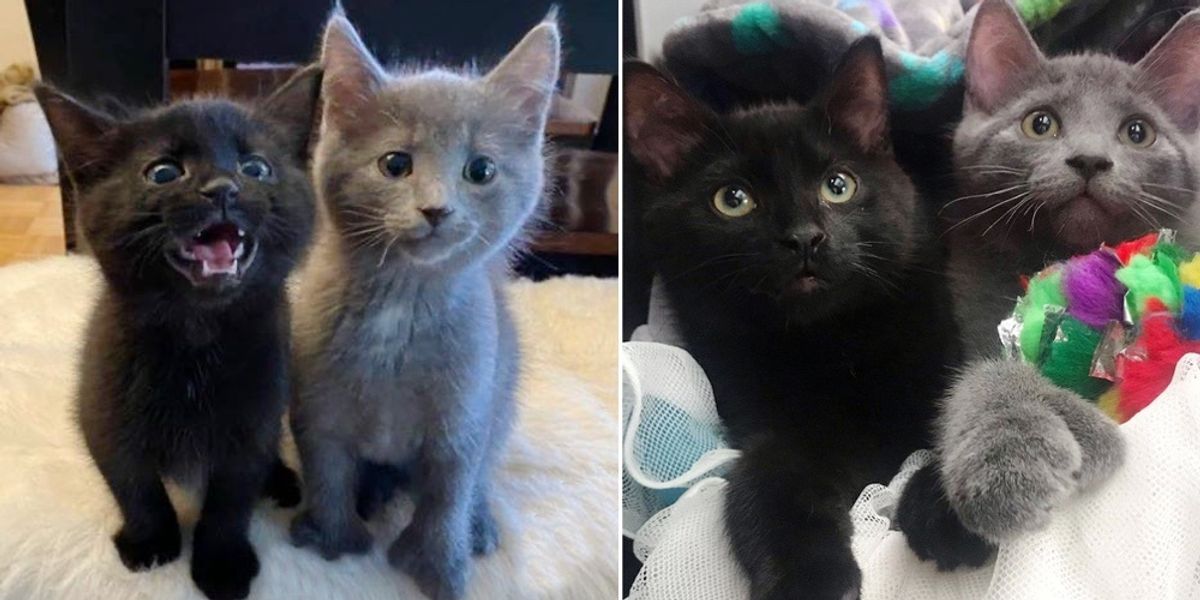 These two kittens who were found on the street together, just had their dream come true.

Irene from Montreal, Canada spotted two tiny kittens huddled up outside by themselves. She couldn’t find any more kittens and their cat mom never returned for them.

The kittens were very hungry and needed round-the-clock care. They managed to survive the elements of the outdoors by keeping each other warm and comforted. Irene took them home and began bottle-feeding them every two hours. it brought them back from the brink.

Once the kittens were big enough to wean, she decided to seek help from her local rescue Chatons Orphelins Montréal, so the pair could get the medical attention they needed and a chance at a better life.

“These kittens were very lucky. Irene took them home just in time and nursed them back to health,” Celine Crom of Chatons Orphelins Montréal shared with Love Meow.

When they arrived at the rescue, volunteers immediately noticed their strong bond. “The two brothers (named Merlot and Mojitos) have always been very close. They follow each other everywhere they go.”

Soon after they arrived at their foster home, they explored every nook and cranny of their new abode and were never far from each other.

Mojitos the gray kitty (a polydactyl) is equipped with extra digits on his paws. Merlot the panther kitty looks up to his brother and always follows his lead.

“They like to sleep together on the top level of the cat tree even though it’s not big enough for two. They insist on staying close to each other always.”

The feline brothers are like two peas in a pod, completely inseparable. They seek each other out if they aren’t within eyeshot. If one of them hops on a table, the other quickly follows suit.

“Their bond is beautiful to see. They adore people and will wait by the door together when their humans get back from work,” Celine shared with Love Meow.

Mojitos is the more outgoing of the two. He is fearless and will try to catch anything that moves.

“He gets into his playful mode as soon as he spots a toy. But when he is cuddled, he will purr up a storm.”

His brother, Merlot, is an observer who watches everything Mojitos does and tries to imitate him. “He is a little shy and likes to cling to his brother. They complement each other so well and share a lovely bond.”

The two have been each other’s rock since they were found on the street. They depend on one another and can’t be separated. When they were ready for adoption, the rescue knew they had to stay together.

A family learned about the bonded siblings and fell in love with the duo. They came to the rescue last week and made them a permanent part of their family.

After weeks of waiting, the two brothers, Merlot and Mojitos, had their dream come true as they headed to their new home.

“They will continue their lives together at their forever home. We couldn’t be happier.”

Related story: Woman Went to Adopt These Two Kittens But Couldn’t Leave Their Other Brother