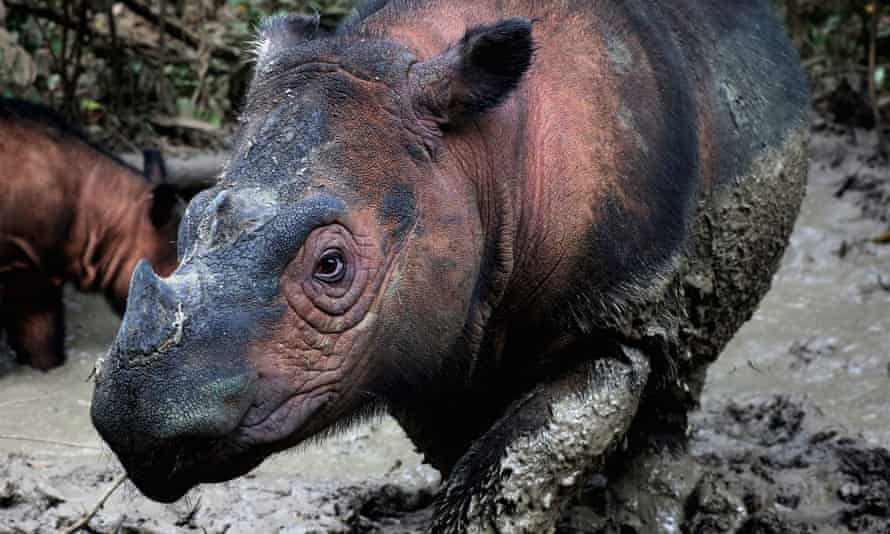 The sixth mass extinction of wildlife on Earth is accelerating, according to an analysis by scientists who warn it may be a tipping point for the collapse of civilisation.

More than 500 species of land animals were found to be on the brink of extinction and likely to be lost within 20 years. In comparison, the same number were lost over the whole of the last century. Without the human destruction of nature, even this rate of loss would have taken thousands of years, the scientists said.

The land vertebrates on the verge of extinction, with fewer than 1,000 individuals left, include the Sumatran rhino, the Clarión wren, the Española giant tortoise and the harlequin frog. Historic data was available for 77 of the species and the scientists found these had lost 94% of their populations.

The researchers also warned of a domino effect, with the loss of one species tipping others that depend on it over the edge. “Extinction breeds extinctions,” they said, noting that unlike other environmental problems extinction is irreversible.

Humanity relies on biodiversity for its health and wellbeing, scientists said, with the coronavirus pandemic an extreme example of the dangers of ravaging the natural world. Rising human population, destruction of habitats, the wildlife trade, pollution and the climate crisis must all be urgently tackled, they said.

“When humanity exterminates other creatures, it is sawing off the limb on which it is sitting, destroying working parts of our own life-support system,” said Prof Paul Ehrlich, of Stanford University in the US, and one of the research team. “The conservation of endangered species should be elevated to a global emergency for governments and institutions, equal to the climate disruption to which it is linked.”

“We are facing our final opportunity to ensure that the many services nature provides us do not get irretrievably sabotaged,” said Prof Gerardo Ceballos of the National Autonomous University of Mexico, who led the research.

The analysis,published in the journal Proceedings of the National Academy of Sciences, examined data on 29,400 land vertebrate species compiled by the IUCN Red List of Threatened Species and BirdLife International. The researchers identified 515 species with populations below 1,000 and about half of these had fewer than 250 remaining. Most of these mammals, birds, reptiles and amphibians were found in tropical and subtropical regions.

Scientists discovered that 388 species of land vertebrate had populations under 5,000, and the vast majority (84%) lived in the same regions as the species with populations under 1,000, creating the conditions for a domino effect.

Known examples of this include the overhunting of sea otters, the main predator of kelp-eating sea urchins. A boom in urchins devastated kelp forests in the Bering Sea, leading to the extinction of the kelp-eating Steller’s sea cow.

The researchers said their findings could aid conservation efforts by highlighting the species and regions requiring the most urgent attention.

Prof Andy Purvis, at the Natural History Museum in London, and not part of the new analysis, said:“This research provides another line of evidence that thebiodiversity crisis is accelerating. The hardest problem [the researchers] faced is that we don’t know more about the history of species’ geographic distributions. They only had that information for 77 of the species on the brink, and we can’t know for sure how typical those species are.”

“But that doesn’t undermine the conclusion,” he said. “The biodiversity crisis is real and urgent. But – and this is the crucial point – it is not too late. To transition to a sustainable world, we need to tread more lightly on the planet. Until then, we are essentially robbing future generations of their inheritance.”

Prof Georgina Mace, of University College London, said: “This new analysis re-emphasises some startling facts about the extent to which vertebrate populations have been reduced worldwide by human activities.” But she said she was not convinced that simply having a population less than 1,000 was the best measure of a species being on the brink. A declining trend for the population is also important and both factors are used in the IUCN Red List, she said.

“Action is important for many reasons, not least of which is that directly and indirectly we rely on the rest of life on Earth for our own health and wellbeing,” she said. “Disrupting nature leads to costly and often hard-to-reverse effects. Covid-19 is an extreme present-day example, but there are many more.”

Mark Wright, the director of science at WWF, said: “The numbers in this research are shocking. However, there is still hope. If we stop the land-grabbing and devastating deforestation in countries such as Brazil, we can start to bend the curve in biodiversity loss and climate change. But we need global ambition to do that.”

This article was first published by The Guardian on 1 June 2020. Lead Image: The Sumatran rhino is on the verge of extinction, with fewer than 1,000 individuals left. Photograph: Rhett Buttler/Mongabay/PA