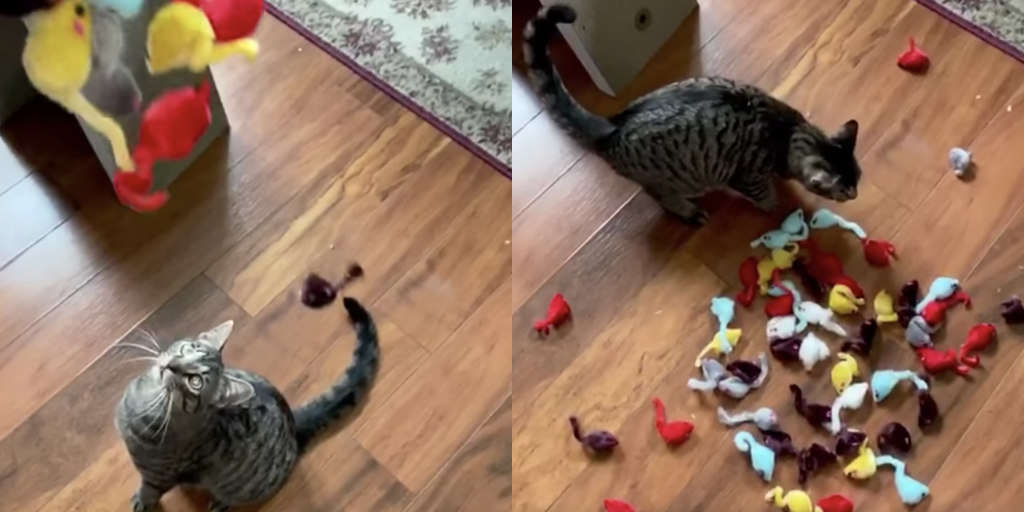 From the moment Melinda Hollyfield met Doc at Puurrrfect Paws Rescue in Tennessee, she could tell how obsessed he was with mouse toys.

“His cage was a disaster, food everywhere, because he had been attempting to play with his mouse toy in the cage,” Hollyfield told The Dodo.

She fell in love with him immediately and adopted him, and little Doc has been following his family around and snuggling with them constantly for six months now. He’s still just as playful as he was when his family first adopted him — and still just as obsessed with his beloved mouse toys.

“He plays with his mouse toys daily,” Hollyfield said. “We’ve gone through a selection of toys, but the inexpensive furry mouse toys are always his favorite.”

Doc loves playing with his mouse toys so much that they get worn out very quickly — he usually destroys one or two of them every week.

“I still keep finding destroyed ones in places,” Hollyfield said. “I feel like he hides them from me because he knows I’ll throw them away.”

Recently, Hollyfield noticed that Doc had found a way to get into the trash and pull out his destroyed mouse toys, because he loves them too much to let them go. She wanted to do something to make up for all the toys she’s had to throw away, so she went online and ordered him a box of 60 mouse toys.

As soon as the mouse toys arrived, Hollyfield called Doc over, and then promptly dumped them all on top of him — and he was shocked and absolutely thrilled.

“He was so overwhelmed,” Hollyfield said. “He had no idea what was happening. He kept looking at one and then another and once they all dropped out, he went wild. I think he sat there and stared at them in disbelief for a minute or so.”

Doc was so excited to suddenly have so many mouse toys, and his mom hopes all his new toys will help him forget about the ones in the trash. She put most of the 60 toys away so she can keep replacing the ones he destroys — but, of course, Doc would really prefer if he could keep playing with all 60 toys at once.

“We let him pick out three mice and put the rest up for when those get destroyed,” Hollyfield said. “He has figured out where they are and now paws the drawer when I’m near it.”