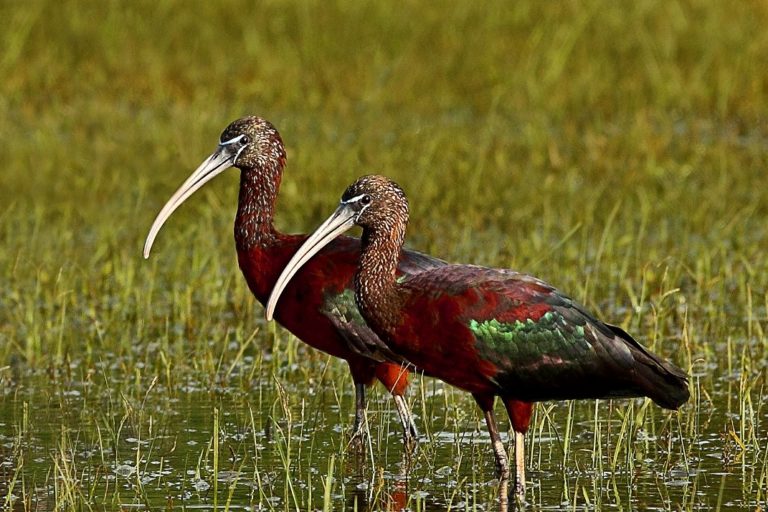 BUNDALA, Sri Lanka – The glossy ibis (Plegadis falcinellus) is a fairly rare but regular winter visitor to Sri Lanka, seen at the Bundala National Parkin the island’s south before it leaves again in spring.

So the sight of these black birds in the middle of May left park warden Ajith Gunathunga puzzled.

He kept his trained eye focused on the species, and on May 21 discovered them nesting — with chicks in the mix.

“The glossy ibis build their nests in a colony where some other waterbirds also nest. I could observe about 20 glossy ibis in the location and total of six nests with a few of them having little chicks, fed by the adults,” Gunathunga told Mongabay.

Bundala is Sri Lanka’s first Ramsar wetland and is popular with migratory and pelagic birds.

The ibis nesting colony was discovered near a safari jeep track popular with tourists; but because all national parks across Sri Lanka have been closed since mid-March in response to the COVID-19 pandemic, the birds were able to enjoy undisturbed parenting time.

Authorities now plan to keep this particular jeep track closed beyond the lockdown period to prevent disturbance to the nesting birds.

Sri Lanka has eased many of the restrictions imposed during the lockdown, but allnational parks remain closed.

Gunathunga said that once Bundala opens, visitors including birdwatchers will be kept away from the nesting sites.

The May 21 observation of the glossy ibis nests with chicks in them came almost 10 weeks after the park was shut down. Glossy ibis eggs take about three weeks to hatch; before that, the breeding pair needs about four weeks for site selection and nest building. That suggests they benefited for much of that cycle from having a visitor-free park to themselves, says Sampath Seneviratne, senior lecturer in zoology with the University of Colombo and president of the Field Ornithology Group of Sri Lanka.

“It is possible that these birds found conditions favorable for breeding even before the lockdown, though the lockdown itself would have contributed to a calmer environment,” he told Mongabay.

He added that migratory waterbirds tend to nest in this ad-hoc manner if conditions are suitable, and that it’s possible the glossy ibis would breed in Sri Lanka next spring too. “If the new chicks after maturity also breed in the island, then we can safely record that Sri Lanka has a resident breeding population of the glossy ibis,” Seneviratne said.

That wouldn’t be unprecedented, says Jagath Gunawardana, an environmental law expert and birding enthusiast. He points to an 1872 observation by the ornithologist William Vincent Legge on glossy ibis breeding in Sri Lanka. According to Legge’s History of the Birds of Ceylon, eight nests were recorded at a lake in Thissamaharama in the south, just 16 kilometers (10 miles) from Bundala national park. But the birds disappeared in the first quarter of the 20thcentury for reasons unknown, Gunawardana told Mongabay. The glossy ibis made a comeback in 1952 to Kalametiya, also close to Bundala, and after that in Bundala itself, Gunawardana said.

In 1973, a solitary glossy ibis was reported in the Nedimala wetlands in suburban Colombo, Sri Lanka’s commercial capital. A flock of eight glossy ibis was recorded in 1990 from the urban Bellanwila-Attidiya sanctuary; 34 individuals were recorded at the same site in 1995, Gunawardana added.

“Glossy ibis dons breeding plumage just before leaving Sri Lanka in end-March or April,” he told Mongabay. “On a number of occasions, I observed them collecting twigs that are used for nest building. However, no nests were built in the urban locations this time around.”

According to Seneviratne, Sri Lanka is home to 508 bird species, nearly half of which (245) are migratory. Their routes are known as flyways, and Sri Lanka is the last landmass south along the Central Asian flyway.

The glossy ibis is just one of a growing number of migratory birds increasingly passing through Sri Lanka. In 2012,the knob-billed duck (Sarkidiornis melanotos) reappeared on the island after an absence of more than half a century. Since that first sighting, the duck has become a regular winter visitor to Sri Lanka with a growing number of sightings.

The glossy ibis has increased its visits to the country since 2015, according Seneviratne. He said he observed a flock of more than 100 individuals this past May, with many in their breeding plumage. While he could not find evidence of breeding, he has continued to observe large flocks of glossy ibis.

Climate change has been cited as a factor for changes in migratory patterns among many species, but the main factor here appears to be the success of conservation measures in attracting migratory birds to breed and nest, Seneviratne said.

“This could be a positive response to some of the conservation efforts bearing fruit, resulting in populations of birds increasing as conditions become favorable for them,” he said.

Beyond Sri Lanka, the breeding range of the glossy ibis, a widespread species, has expanded. In Algeria, the glossy ibis made a comeback after almost a century with the first breeding recorded in 2002. A new range in neighboring Tunisia was first recorded in 2008, and records up to 2017 indicate continuous nesting, though sporadic. Until 2006, the glossy ibis was very rarely found breeding in France, but field research has shown evidence of a significant increase in breeding pairs,reaching up to 2,087 in 2017. Even in North America, the glossy ibis seems to be expanding its range.

This article by Malaka Rodrigo was first published on Mongabay.com on 8 June 2020. Banner image of a glossy ibis pair, courtesy of Vimukthi Weeratunga.