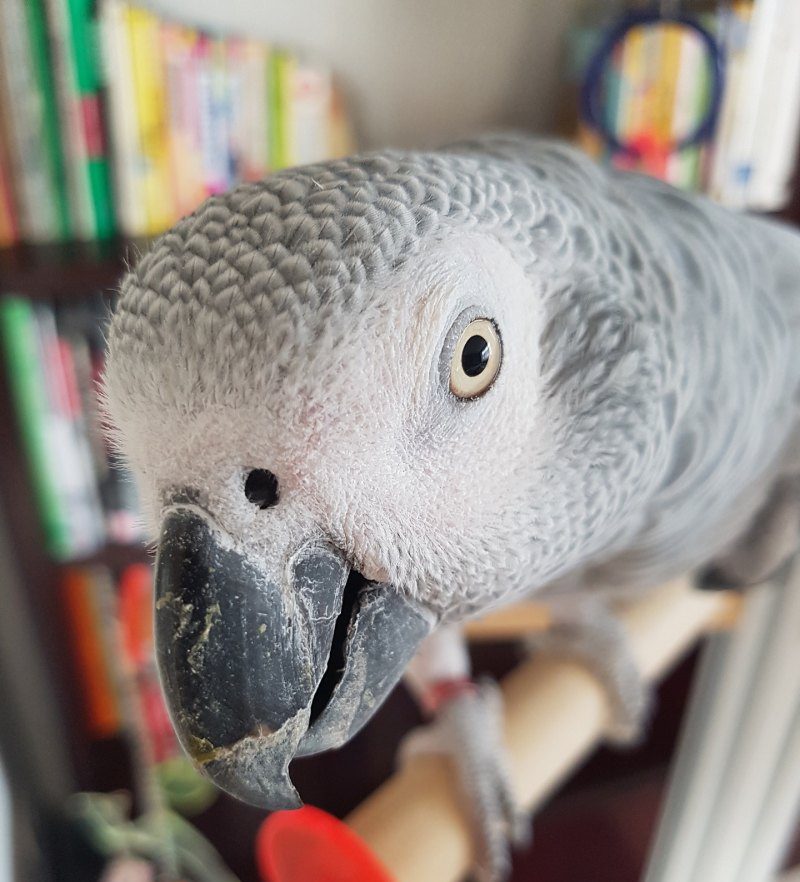 An important and controversial issue in the world of scientists who study animal behavior and animal cognition is whether we err in our analyses by anthropomorphizing our subjects or go too far in the opposite direction—when we actively avoid drawing parallels so as to be considered completely dispassionate in our explanations of what we describe. A good discussion of this issue is in Mama’s Last Hug, by Frans de Waal—he evaluates in detail the behavior patterns he has seen over a lifetime of research on social interactions among nonhuman primates, and argues that the emotions of nonhumans do not really differ from those of humans.

Unlike de Waal, I study cognitive processes rather than behavioral interactions between individuals and among groups; I’ve also studied only a single species, and only a few individuals of that species. Recently, however, the well-respected journal Behaviour asked scientists to submit anecdotal observations of nonhuman actions that suggested possible comparisons with those of humans—instances that would suggest that nonhumans could engage, for example, in deception. My students and I came up with a few of these anecdotes, and that led me to think about other human-like behaviors I had witnessed.

One such incident, just this week, led me to think about remorse, and when I shared the incident with a former student, she shared one with me. Again, these are single anecdotes, but maybe with enough such anecdotal evidence a case could be built for further study.

So…here’s the background for my incident. At the moment, Griffin’s arthritis is really acting up, and even the laser treatments we provide don’t seem to be helping all that much. (NB: Our vet is exploring other possibilities.) I was sitting next to his cage, watching him eat from his bowl, when I saw him slip….he was hanging by one foot, couldn’t right himself no matter what he tried. So I went over, stuck my hands into the cage to support him, lifting him so he could perch properly. He did, and as I moved away, he struck out, biting deeply into my hand. I don’t know if he was startled, thought my hand was the perch, or angry because I hadn’t helped immediately.

I’ve been working with parrots for over 40 years, and have been bitten many times, but this was the deepest puncture wound I’d ever received. It wasn’t even bleeding that much—no slicing, just deep. All I could do at the time was rub in hand sanitizer. (BTW—I am now on antibiotics, so it was indeed serious.) I showed it to Griffin, and he raised his foot in his “pick-me-up gesture”—and then he sat with me for the next hour, not even preening, just looking—and I have to say with what appeared to be a very sad expression—alternatively at my face and the small drops of blood coming from the wound. All the time, he was favoring his sore foot…but he didn’t ask to go back to his cage, he wasn’t preening the way he usually does when on my hand; he just sat with me until it was time to make dinner.

Now, not all of my parrots act remorseful. If Athena bites, it is because you’ve done something she thinks is unacceptable, and she actually looks quite satisfied with herself afterward. Alex knew to say “I’m sorry” when he did something to upset the humans in his life—he had learned that the phrase would quickly defuse our anger or annoyance. I don’t think he really understood the meaning of the phrase—he rarely if ever exhibited contrition, often repeating the behavior that had triggered our displeasure in the first place. Sometimes he did behave properly afterward, but either way, he really knew that the phrase worked to calm his human companions. Griffin doesn’t know to say “I’m sorry”—but I think he really was remorseful.

One of my students shared a similar incident about Griffin. He takes a long time to warm up to new students, and only a very few of them earn his trust enough to be allowed to pop his quills and give him tickles with their fingers. Sometimes, however, he’ll show that he’s beginning to like them by giving them a “kiss”—a gentle nibble on their nose at the end of their shift. Once, early on in this student’s tenure in the lab, he slipped off his cage while trying to give her a kiss, and grabbed onto what he could—her nose—he didn’t bite through (thankfully!), but it was a definite wound. However, as soon as she got the bleeding to stop, he requested, for the first time ever, to “Go chair” (to sit alone with her) and also for first time he let her give him finger tickles. She said it did seem to be his way of apologizing, and that it was worth missing her next appointment to stay longer!

So…these incidents may simply be anecdotes, or maybe they provide real insight into the mind of a Grey parrot. I’ll let you decide!