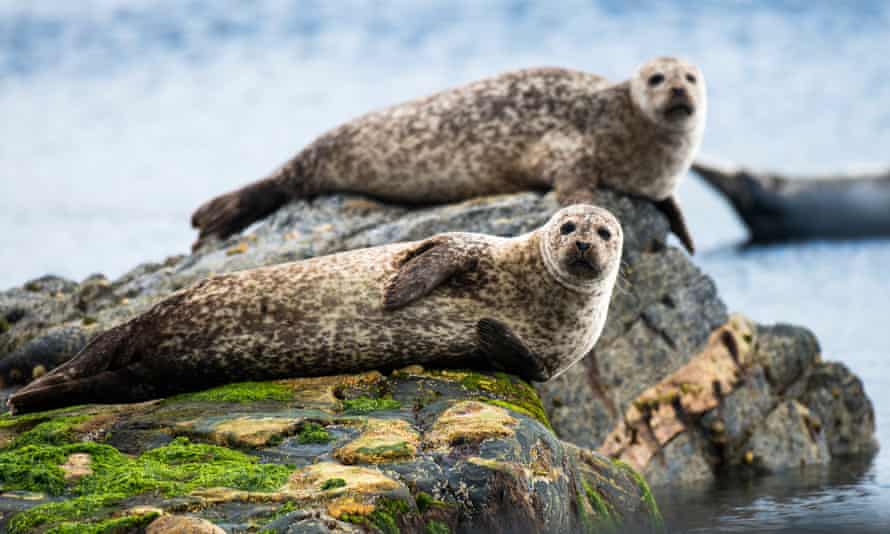 Salmon farmers in Scotland will be banned from shooting seals and face tougher controls on using acoustic devices to scare them off under stricter wildlife protection laws.

Scottish ministers are introducing the measures due to fears the US could ban Scottish salmon imports because killing and harming seals will breach US regulations protecting the welfare of marine mammals in the wild.

The Scottish government and fish farmers have come under pressure from ecologists and animal welfare campaigners to bar fish farmers from shooting and scaring seals to stop them breaking into salmon pens.

Scottish Natural Heritage, the government conservation agency,has told ministers there is significant scientific evidence the acoustic deterrent devices (ADDs), which emit tones underwater to scare off seals, can cause hearing damage and stress in dolphins, porpoises and whales – breaching legislation to protect cetaceans.


Ministers in Edinburgh will promise to table plans to licence and control the use of ADDs by the end of March next year.

The latest data shows 31 seals were shot under licence in the first three months of 2020, double that of last year. The Scottish Salmon Producers Organisation (SSPO) said seal predation and net breaches lead to 500,000 lost fish a year.

However, the risk of a US import ban has unnerved ministers and the SSPO. The US imports 25,000 tonnes of premium Scottish salmon, accounting for 26% of Scotland’s salmon exports, worth £179m a year.

The measures are being introduced in government-backed amendments to the animals and wildlife (penalties, protections and powers) bill being voted through by MSPs on Wednesday.

The bill includes much tougher penalties for wildlife crimes, including the persecution of protected birds of prey by poisoning and nest disturbance, following years of pressure from conservationists and the Scottish Society for the Prevention of Cruelty to Animals.

The penalties will allow courts to jail offenders – including for dogfighting, badger baiting and animal cruelty – for up to five years and impose unlimited fines. Until now, the maximum term for the most serious offences was 12 months and a £20,000 fine.

The bill also drops a time bar on prosecutions. The current legislation requires a prosecution to start within six months of an offence, limiting the ability of investigators to detect some crimes and to gather evidence.

Other changes introduce fixed penalty notices for minor or technical offences, and powers for the SSPCA to rehome animals seized from offenders such as puppy farmers or those involved in dogfighting as quickly as necessary, without a court order. At present they have to wait two years before doing so.

Bob Elliot, the director of the animal welfare charity OneKind, said the ban on shooting seals was essential, and welcomed much tougher sentences for wildlife crimes. “For too long criminals have been getting away with low sentences. This puts wildlife crime into a more serious bracket, which should enable the police to undertake surveillance and regard it as a much more serious issue.”

Hamish Macdonell, a spokesman for the SSPO, said the industry accepted the need to ban shooting of seals but still needed effective controls. “They can inflict vicious and widespread damage on salmon farms, killing hundreds of fish in each attack,” he said.

The industry would work with ministers to help arrive at the most effective regulations on acoustic deterrents, he added.

This article was first published by The Guardian on 17 June 2020. Lead Image: The latest data shows 31 seals were shot under licence in the first three months of 2020. Photograph: James Warwick/Getty Images.