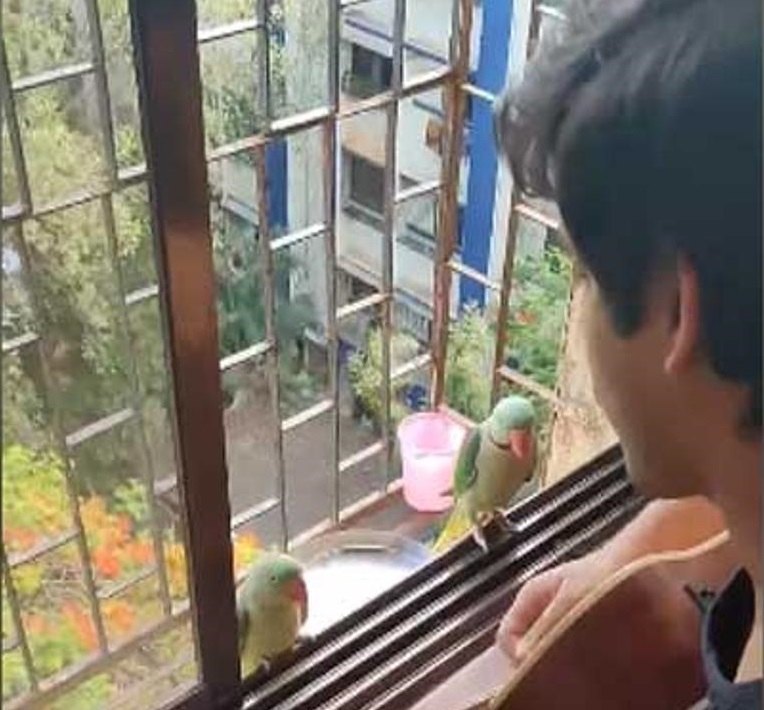 It is recognized universally that music and other forms of art can deliver a breezy step to the heart of matters. Just ask any parrot owner. They will be quick to tell you that their bird(s) get animated by music. And judging by a recent viral video on Facebook, wild parrots seemingly are just as adoring of music and will go to it.

Recently, a guitarist from Mumbai by the name of Jatin Talukdor sat by an open window to play his acoustic guitar. As he played, he whistled along with the music he made. Shortly after his start, two wild parrots flew to the windowsill, alighted, and spent some time grooving with the young guitarist. Jatin thinks the birds were drawn to him by his whistling. Nevertheless, the birds put aside their inherent natural concern to move closer to the soundhole from where the enhanced sound echoed from. They danced, and even “sang” along to his guitar performances.

At last report, the birds still come back to the window for more guitar and, of course, some food. Jutin has come to see the birds as his audience and that he is “gigging” for them. He even calls them family now, giving them names. He calls one Jim, and the other Kiari. Their visits have made the Covid lockdown in India much more tolerable for Jutin. He wanted to share that experience and thus posted the video for all to see.

The viral response to the posted video has been heartwarming for most who have invested the few short minutes to watch the YouTube video. But beware…it is heart-touching and beyond an adorable way to make friends. You can also click over to the Facebook page of Jutin Talukdor, and follow his times with the two birds in new posts.

Of course, this is an isolated incident that we read stories about from time to time. But the star here is not necessarily Jutin –the guitarist, or Jim and Kiari, who have set aside personal concerns to spend some time listening to magical sounds. It is the connect that we have with something that is beyond us, something that can be created by one and enjoyed by another. We are often fueled by the discovery of intelligence within the biological makeup of our creatures and not just in birds. But birds often surprise us by what they do display. We know they love music. Hey…just ask Jutin. He will tell you a personal story about how two birds who came to visit him and his guitar. And became family.