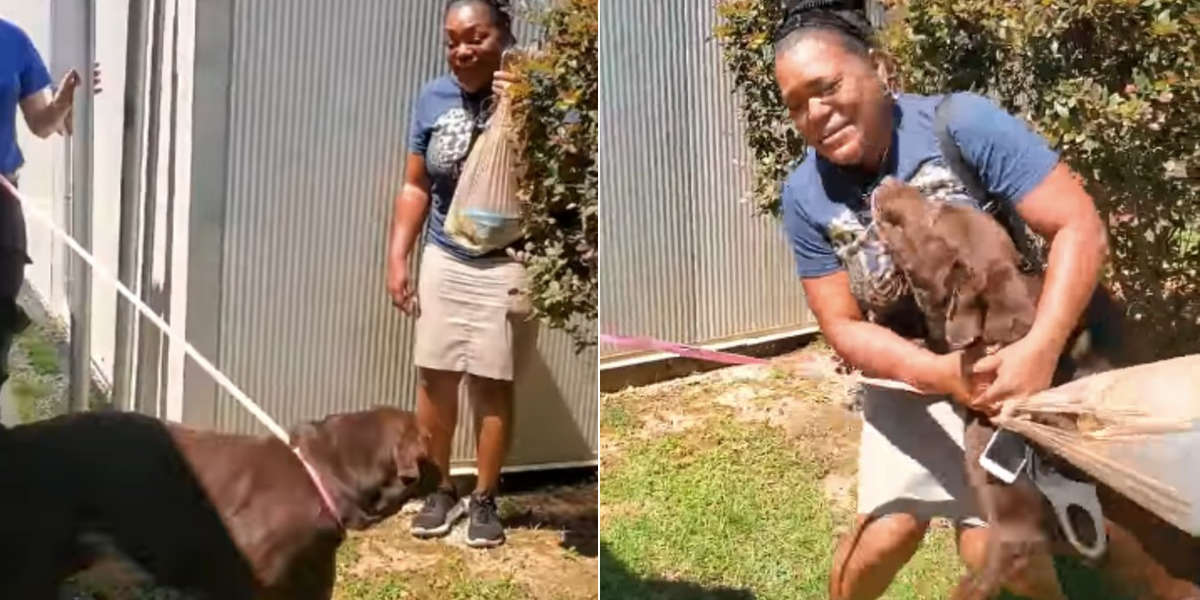 “[He] looked me straight in the eyes as if he was saying, ‘I gotta see that this is really you.’”

Twixx had been a bit of an escape artist, known for digging tunnels under the fence. That’s how he ended up with a little scar on the top of his head.

Harmon’s husband had recently installed metal posts around the fence making it impossible for Twixx to get out. After checking the gate and the fence, they couldn’t find any signs of tampering — it was as if Twixx had just disappeared.

Harmon began searching the neighborhood, making posters, posting on Facebook and checking with the local animal control. Then a woman who had been following Twixx’s story on Facebook reached out to Harmon via text.

“She said, ‘I’m so sorry to send you this, but I found your Twixx. He’s been hit on the side of the road and here’s his picture,’” Harmon told The Dodo. The woman sent Harmon a photo of the top of the dog’s head, and there was Twixx’s little scar.

Harmon reported Twixx as deceased to the microchip company, but still had difficulty accepting that he was really gone. “I never truly believed it in my heart,” Harmon said. “My husband said, ‘You’ve got to let this go. You’re grieving over him.’ But I said I would never get another dog and I didn’t for two years.”

Then, earlier this month, Harmon was sitting with her church group when a miracle happened — she received a call from the local animal shelter asking if she had ever owned a chipped pet.

“I just started bawling. I was crying endlessly, and I was around quite a few church members and they rushed to me, thinking I had bad news,” Harmon said. “But when they looked at me I was smiling.”

After so long apart, Harmon worried that Twixx wouldn’t remember her. And the last thing she wanted was to make her dog feel scared or uncomfortable.

So the shelter came up with a plan: When Harmon came to pick up Twixx, they would hold him behind the gate while she called his name, and shelter staffers would watch the dog’s reaction.

When Twixx arrived at the shelter gate, Harmon began to gently say his nickname — Tootaroota — and as soon as the dog heard her, he put his snout on the ground as if sniffing for his mom.

“Finally, when I bellowed out ‘Twixx’ he ran to the gate and stood at attention,” Harmon said. “And I heard the lady say, ‘Let him out because he’s trying to find her.’”

You can watch the touching reunion here:

As soon as they opened the gate, Twixx turned the corner and ran straight to his mom. It was as if he remembered every minute they had spent together, and the two years apart faded away.

“He couldn’t stop wiggling — oh my goodness — and he just jumped on me,” Harmon said. “Then he laid his head in my arms and looked me straight in the eyes as if he was saying, ‘I gotta see that this is really you.’”

Soon everyone watching the reunion had tears in their eyes — including Harmon.

Now, Twixx is home safe and sound with the family that loves him. And he hasn’t dug another hole since.