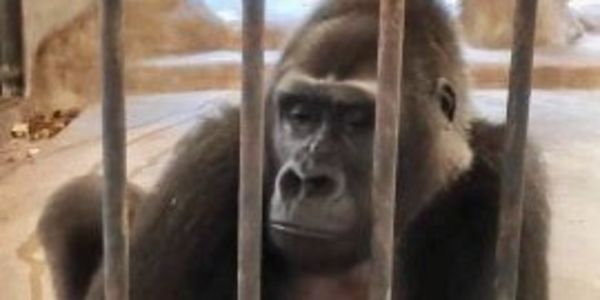 While chimpanzees and bonobos are understood to be the animals that are most closely related to human beings, gorillas are not far off.

From one look at a gorilla, it’s not hard to imagine. Gorillas are highly intelligent; they often use tools to perform various tasks and have a well-developed communication system.

They also exhibit many behaviors and emotions that one might deem “human-like.”

Unfortunately, these majestic animals are not only endangered, but are also kept in inhumane conditions at zoos and other animal attractions.


Bua Noi is a gorilla that has been kept in Pata Zoo, located on the top floors of a department store in Thailand, for thirty-three years.

Authorities charged the zoo for breaking several laws and called for the removal of all of their large animals in 2015, however, the zoo did not follow through.

In April of 2020, a fire broke out in the zoo, but despite continued concerns and criticism over the animals’ captivity, no changes were made.

Bua Noi is still suffering in an unnatural environment and deserves to be surrendered to an animal sanctuary.

There have been multiple offers from animal welfare organizations, like PETA and the Aspinall Foundation, to help with the removal and relocation of Bua Noi.

The renewal of Pata Zoo’s lease is in June 2020. Sign this petition to ensure their lease is not renewed so Bua Noi and the other captive animals can live out their lives in animal sanctuaries with proper care.

This article was first published by OneGreenPlanet on 23 June 2020. Lead Image Source : Inhumane Treatment of Bua Noi in Pata Zoo.