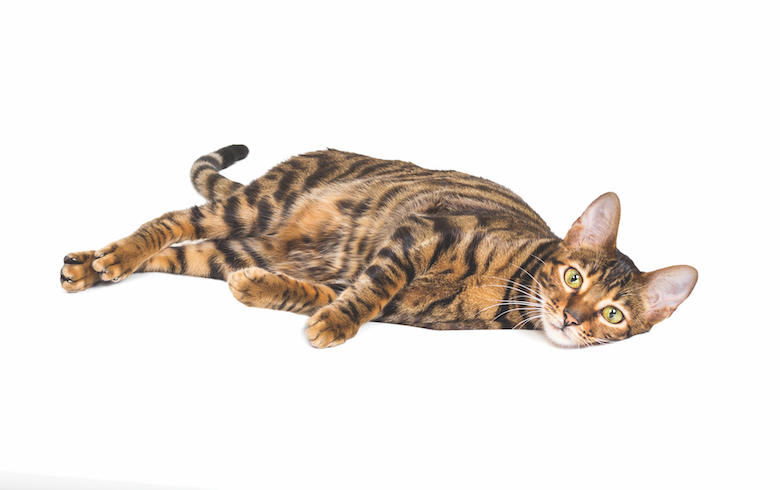 Tiger by looks, lap cat by temperament, the Toyger will leap into your heart with one swipe of her paw.

The Toyger earned her moniker in a fairly simple way: by combining the words “toy” and “tiger.” Though once known as the “California Toyger” due to her California origins, the name was shortened to Toyger, and it fits her purrfectly.

Wild in looks only

The Toyger may look feral, but she’s 100% domesticated, with not a drop of wild blood in her. Created by Bengal cat breeder Judy Sugden, the Toyger breed came to fruition from a desire to bring attention to the plight of the endangered tiger by creating a domestic, miniature version of the big cat.

When Sugden, the daughter of original Bengal breeder Jean Mill noticed tabby markings on the temple of her Bengal, Millwood Sharp Shooter, she was struck with inspiration. Beginning with a Bengal named Millwood Rumpled Spotskin and a striped Domestic Shorthair dubbed Scrapmetal, along with Jamma Blu, a street cat sporting spots in lieu of tabby lines imported from Kashmir, India, Sugden got to work. With assistance from breeders Alice McKee and Anthony Hutcherson, the Toyger was born.

See how she sparkles

Like the vampires in Twilight, when they step into the sunlight, Toygers have a shimmering quality to their coats. Often referred to as gold glitter, the twinkling topcoat, so to speak, rests upon a white belly and vivid orange coat that is crisscrossed with dark, dramatic, vertical, patterned, branched and broken stripes.

Fun Fact: The International Cat Association (TICA) is the only registry that recognizes the Toyger. In 1993, TICA accepted the Toyger for registration. By 2000, TICA had moved the Toyger to new breed status and, in 2007, the Toyger was bestowed the honor of recognition for champion status.

Like a fingerprint is unique to a human, the patterns found on the Toyger are unique to each and every cat, making them 100% one of a kind. The one commonality across the Toyger board is to ensure that facial markings are circular in pattern.

They don’t call them “tiger cats” for nothing! That said, in the grand scheme of things, the Toyger is still considered a medium-sized cat. Females tend to range between 7 to 10 pounds, while males hover in the 10 to 15 pound spectrum. Her physique (high shoulders coupled with a long body) and gait (similar to that of wildcats), however, give the illusion that she is bigger. 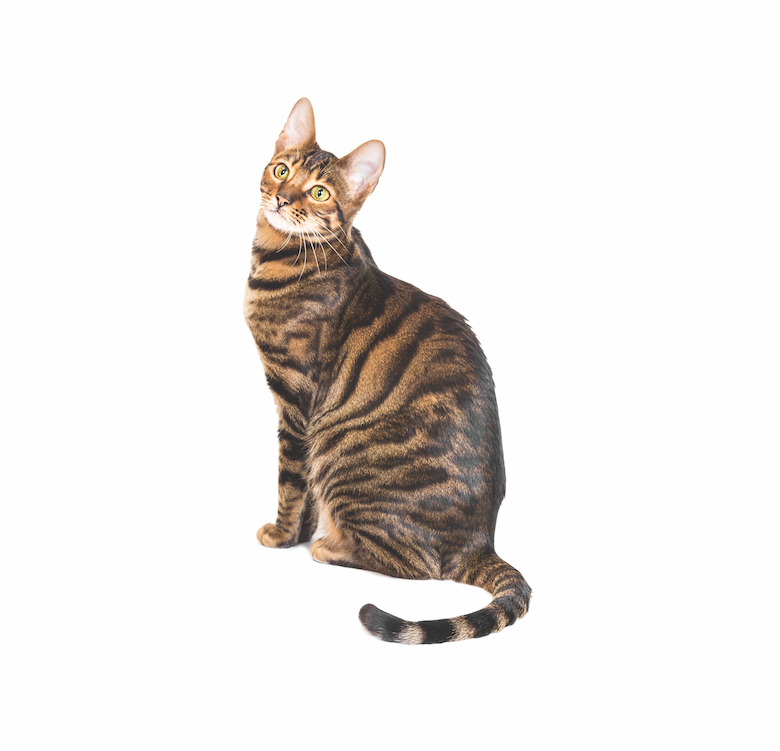 Laid-back and easygoing, the Toyger could easily be compared to a canine given her penchant for lap time, pleasing her peeps and playing. A highly intelligent breed, the Toyger is very easy to train (many recommend her for agility training) and loves to be kept on her toes. Some of her favorite tricks: playing fetch, solving puzzles (with treat rewards, of course!) and long walks with her one true love. Yes, you read that right! The Toyger is easy to leash train. That doesn’t mean that she needs daily walks like her canine counterparts, but she does love a walk or two thrown into her weekly
repertoire.

The Toyger’s chill persona, and 12- to 15-year life span, make her an ideal choice for families or those leading the single life. As long as she’s showered with a healthy dose of attention and affection (which she is happy to return), she’s living the good life. Bonus: She also gets along with dogs and other creatures you may share your digs with (a fellow feline perhaps?)!

Like their Bengal cousins, the Toyger actually enjoys water, so don’t be surprised if she tries to play in the tub while you’re taking a bath!