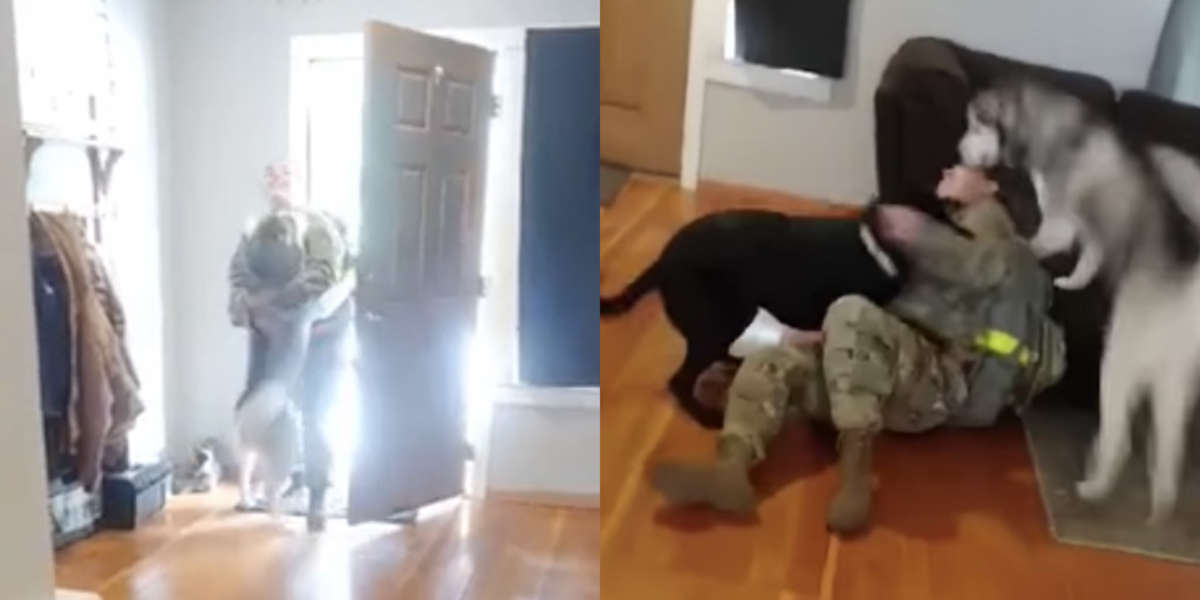 Bauer first met his mom when he was just a puppy, and ever since then they’ve been basically attached at the hip. Bauer follows his mom everywhere she goes and loves hanging out with her no matter what they’re doing.

“Bauer isn’t your typical husky, he doesn’t bark and he rarely howls,” Taryn Dennison, Bauer’s mom, told The Dodo. “He loves sleeping and when he’s awake he’s right next to you trying to get all the cuddles and pets he can or to get you to throw his toys.”

When Dennison found out she was going to be deployed, she knew it was going to be hard to leave Bauer behind. He stayed with her roommate and her roommate’s dog, Macie, and was cared for and loved so well, but everyone could tell that he missed his mom so much.

“Bauer didn’t understand why I was gone,” Dennison said. “I FaceTimed him a few times and he would run around my house trying to find me and then later he would end up laying down and falling asleep in front of my door.”

… and as soon as she walked in the door, Bauer completely lost it.

He was overwhelmed with joy and so thrilled that his mom was finally home, and couldn’t stop licking her and jumping all over her.

“I honestly thought he was going to pee on me because he was so excited,” Dennison said.

Even Macie was excited, especially when she saw how happy Bauer was, and both dogs jumped around Dennison as she sat on the floor with them. After so much time apart, she was so happy to finally be home with Bauer and the rest of her loved ones.

“Since I got home he’s been attached to my hip,” Dennison said. “I can’t even get up to go to the kitchen or the bathroom without him being right next to me. I wouldn’t change it for the world!”

Bauer missed his mom so much, but now that she’s home, he’s making sure he doesn’t take a single minute of being with her for granted.