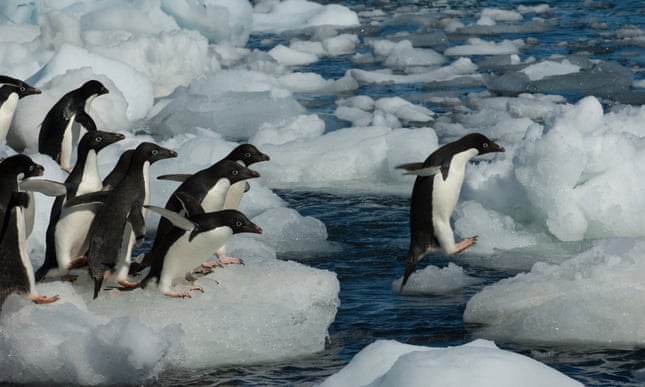 Adélie penguin populations could boom in coming years, according to research revealing the small birds find it easier to forage when sea ice is sparse around continental Antarctica.

While, overall, sea ice extent has increased in the Antarctic over recent decades, in the past few years it has fallen dramatically – a matter of deep concern in the scientific community.

However, Adélie penguins – the birds whose sexual antics so shocked early explorers – have more breeding success on the continent when levels of sea ice are low.

Now scientists say they have worked out why: the birds can forage more efficiently. The upshot is a higher growth rate for their chicks, and more fledglings per nest.


Dr Yuuki Watanabe, first author of the study from the National Institute of Polar Research in Tokyo, said the study showed not all animals would necessarily suffer from the climate crisis which, he said, models suggest could reduce sea ice in the Antarctic.

“Our study shows that the completely opposite results can happen, and highlights the complexity of climate change effects on wildlife,” he said.

The study, published in the journal Science Advances, reveals how Watanabe and colleagues electronically tagged 175 Adélie penguins in Lützow-Holm Bay, in continental east Antarctica, and followed them for four breeding seasons from 2010.

While three seasons featured extensive sea ice in the foraging area, in late December 2016 to early February 2017 a large section of sea ice broke up, leaving an extensive area of open water.

Using GPS and accelerometer data from a subset of the penguins, the team discovered that when the foraging area was covered in ice the penguins had crossed the frozen expanse on their feet or their bellies, looking for a gap to dive through to find food – facing stiff competition in the process.

When the area was ice-free, however, the penguins could enter the water on the doorstep of their nests. With the birds moving four times faster when swimming than walking, the result was foraging trips that took 3.2 to 7.9 hours less time on average but covered up to 4.8km further, used less energy and likely involved less competition, while dives were also shorter.

“In ice-free seasons, [the penguins] travelled fast by swimming and dived anywhere they wanted. They came back to the nest quickly, which means that chicks waiting at the nest had food more often,” said Watanabe, noting the improved foraging conditions improved breeding success.

Moreover, the ice-free conditions led to blooms of phytoplankton, increasing the density of certain small crustaceans on which the penguins prey.

However, the overall number of nests and chicks were smaller during the ice-free season, suggesting winter conditions also matter, while not all Adélies enjoy a loss of sea ice. Adélies living on the Antarctic peninsula and islands in the Antarctic, where sea ice is already sparse, are known to fare worse in such conditions, something Watanabe said was likely down to factors including a loss of resting places while foraging and less protection from predators.

Watanabe warned the study did not mean the impact of the climate crisis in the Antarctic was less of a concern.

“Responses to climate warming will differ depending on species and regions,” he said, for example predatory seabirds called skua found it harder to catch big and healthy penguin chicks.

Dr Tom Hart, a penguin expert from the University of Oxford, said the scale of the tagging was impressive, but stressed the study only looked at one site where sea ice was not frequently scarce.

But he said the research helped explain why Adéile penguins seemed to be increasing in areas with high sea ice yet declining where sea ice was already low.

“It seems to be the Goldilocks hypothesis,” he said. “It fits the idea that intermediate sea ice is the sweet spot for these penguins as there is both lots of food and easy access to it.”

This article was first published by The Guardian on 24 June 2020. Lead Image: Adélie penguins have more breeding success when levels of sea ice are low, meaning their population could boom in coming years. Photograph: Wolfgang Kaehler/LightRocket/Getty.