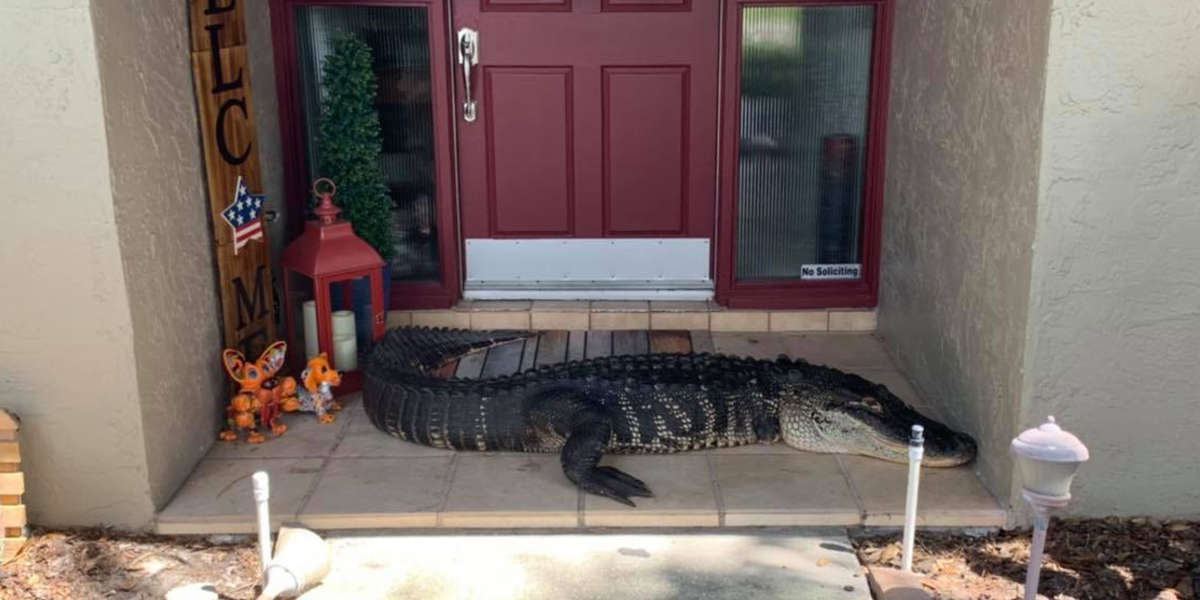 Last month, a family woke up to find a surprise visitor lying at their front door. The 8-foot alligator was sprawled across their welcome mat, enjoying the shade.

The Tampa family did their best to try and coax the alligator to leave their doorstep, but he seemed too comfortable to give up his spot.

Unsure of what to do, the residents put up a sign for the mailman reading: “Delivery stop! Leave packages here!  ALLIGATOR at front door!! (Seriously).” They also called the expert trappers for help with their unusual visitor.

It was clear that the alligator had traveled a long way, looking for a safe spot to snooze.

“The alligator most likely came from a nearby lake, however, the lake is not directly in front of or behind the house,” Karina Sura Paner, a manager at Croc Encounters, told The Dodo. “The alligator did travel some distance to get to their front door. He was most likely looking for a new body of water during the night. It is possible that at sunrise he found a shady spot to hide.”

When the rescuers arrived at the scene, they could see that the alligator was missing two limbs, most likely a result of a fight with another alligator.

However, that didn’t stop him from making a big mess when the rescuers tried to remove him from the property.

“The alligator was quite content until we approached him, at which point he opened his mouth to give us a warning hiss,” Paner said. “When we secured him with a rope he reacted as alligators will do by swinging his tail back and forth and even death rolling several times.”

While the alligator couldn’t be released back into the wild, he has found a home where he will live in an outdoor, natural enclosure with a group of other alligators, and won’t have to worry about his missing limbs slowing him down.

Now, the alligator is safe and has finally found a shady spot where he can rest as much as he wants without a mailman in sight.