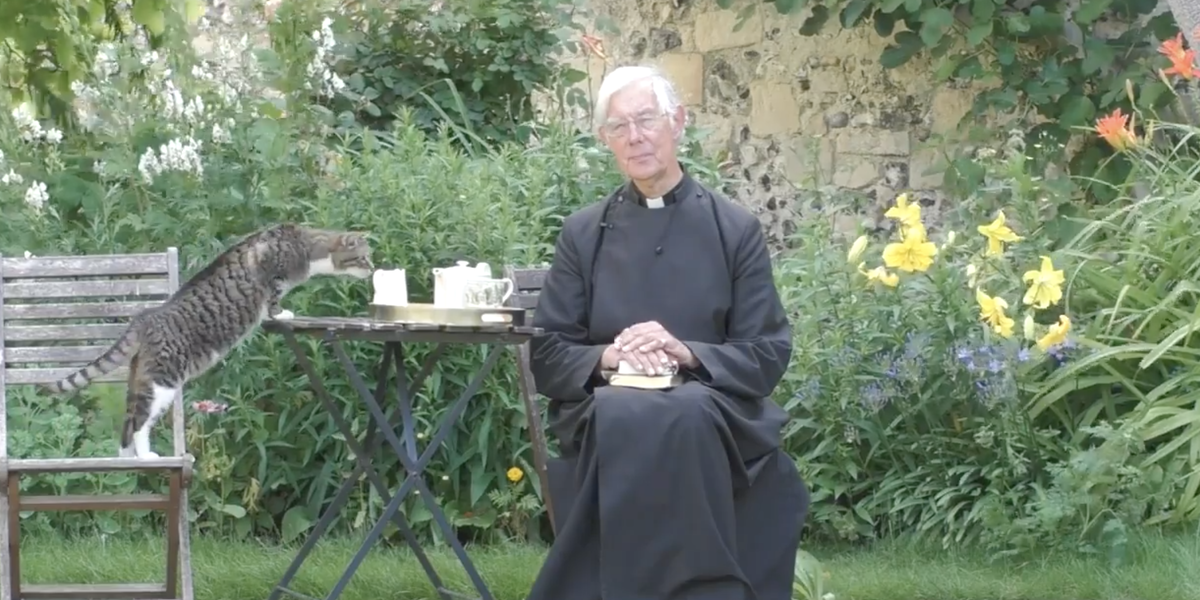 “He has a huge appetite and is always hungry” 😹

When Canterbury Cathedral first decided to start doing virtual prayer sessions due to the coronavirus pandemic, they had no idea that the resident cats would end up wanting to help, too — especially Tiger.

Tiger lives at the deanery on the grounds of Canterbury Cathedral, and has a very busy life there. He’s one of four resident cats and has earned the title of “Gardener Cat” because of how much he loves overseeing the activities outside — investigating the different flowers and vegetables, watching the fish swimming in the pond, and, of course, sunbathing anywhere and everywhere.

When Dean Robert began doing his virtual prayer sessions outside, Tiger and the other cats immediately joined in, running past him or cuddling up near him as he delivered his message. Their disruptions were usually minimal — until one morning, when Tiger realized that Dean Robert had taken his breakfast outside with him.

“He has a huge appetite and is always hungry,” Nathan Crouch of Canterbury Cathedral told The Dodo.

As Dean Robert delivered his morning prayer, Tiger walked past him, hopped up onto the table next to him, and decided to help himself to the milk Dean Robert had brought out for his tea.

Dean Robert acknowledged Tiger’s presence to his viewers and then continued with his prayer as Tiger ate his snack. As soon as the video was posted, everyone who saw Tiger and his milk stealing absolutely adored it, and it definitely helped brighten the days of so many people.

“We’ve had a huge response from around the world,” Crouch said.

While Canterbury Cathedral has reopened to visitors and is offering free entrance for children and reduced prices for adults through September 2020, they’re still continuing to do their virtual sermons — and there’s no doubt in anyone’s mind that everyone will continue to catch glimpses of Tiger and his other cat friends in many, many videos to come.

You can check out the full video of Tiger’s snack stealing below: