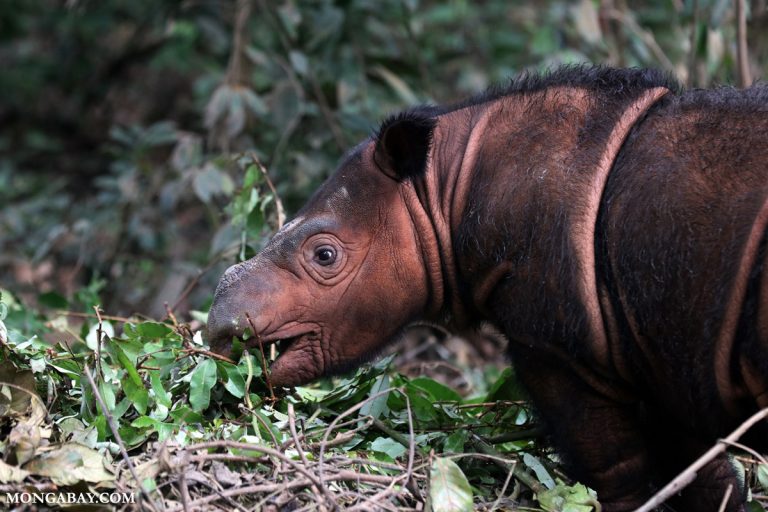 Fatu doesn’t seem to care about the carrot she’s been offered by her caretaker. She raises her enormous head and gives it a sniff before returning to what she was doing, which is nipping delicately at the dry, scraggly grass at her feet. A few yards away, her mother, Najin, is doing the same.

“They’re very happy. Happy ladies,” their caretaker, Jacob Anampiu, says with a grin, continuing to hold the carrot outstretched. At 3 p.m., Kenya’s equatorial heat is brutal, but neither Fatu nor Najin seem bothered — not by the carrot, not by the heat, not by anything.

Fatu and Najin are northern white rhinos (Ceratotherium simum cottoni). And though they don’t know it, they’re at the center of an intensive international effort to rescue their subspecies, of which they are the only two left on the planet.

More than 7,000 kilometers (4,300 miles) away, in Indonesia, Sumatran rhinos are facing a similar crisis. Though smaller and hairier than their northern white counterparts, Sumatran rhinos (Dicerorhinus sumatrensis) have also been driven to near extinction, with fewer than 80 remaining.

The crisis with Sumatran rhinos is unfolding similarly to the northern whites: population estimates have plummeted by 70% in a little over a decade, and efforts to breed them naturally in captivity have yielded few offspring.

But the assisted reproductive technology (ART) pioneered for the northern white rhinos has yet to be widely applied to the Sumatrans.

Scientists have made great strides creating technology that has become the northern white rhinos’ sole chance at survival. In August 2019, an international team of experts successfully harvested an initial round of eggs from Fatu and Najin from their home at Ol Pejeta Conservancy.

The eggs were then rushed to Italy, where a private lab created embryos using sperm preserved from a now-deceased male northern white rhino.

If all goes well, the embryos will eventually be implanted in a genetically similar southern white rhino surrogate, since health issues mean that neither Fatu nor Najin can give birth. While success is by no means guaranteed, researchers from around the world are working single-mindedly to reach their goal.

But a litany of political restrictions and differences in ideology have thus far prevented the high- tech tactics being tried on the northern white rhinos from being successfully used on the Sumatran rhinos.

Thomas Hildebrandt, of Germany’s Leibniz Institute for Zoo and Wildlife Research, is one of few researchers directly involved with ART programs for both species of rhino. He led the oocyte extraction from Fatu and Najin in Kenya in August 2019.

One month later, he performed the process on Iman, Malaysia’s sole surviving Sumatran rhino. But scientists were unable to create a Sumatran rhino embryo, pointing in part to the poor quality of the available sperm after negotiations for healthier samples from Indonesia failed to yield an agreement.

Iman died in November, meaning that all remaining Sumatran rhinos on Earth now reside in Indonesia. Hildebrandt told Mongabay that while he has been asked to share his expertise, he has never been invited to the country to perform an extraction.

“We met some authorities in Jakarta, but were never allowed to work on Sumatran rhinos on Indonesian ground,” he says.

Indonesia has long been wary of foreign meddling when it comes to its natural resources. The country’s environment ministry recently cut ties with WWF over a perceived social media slight, throwing its rhino breeding program into limbo. And years of negotiations to transfer genetic material between Indonesia and Malaysia were waylaid by bureaucratic obstacles.

Indonesia’s Ministry of Environment and Forestry did not respond to a request for comment.

Cesare Galli, who created embryos with Fatu and Najin’s eggs at the Avantea lab in Italy, says he actually began learning the technique in Malaysia starting in 2014, working with Hildebrandt and his team on Iman. He never managed to create a Sumatran rhino embryo, however, due to a series of setbacks: “One female died because of age, the semen was really poor quality, and the Indonesians were not cooperative,” he said. “So we basically stopped.”

Still, the work he did on the Sumatrans did lay the groundwork for the process he would eventually use for northern white rhino gametes. With Fatu and Najin, the relative ease of airlifting the eggs to Italy allowed Galli and his team to “speed up the research that led to the success in 2019 of producing the first embryos.”

Indonesia’s tight restrictions on its rhinos, however, means that researchers are going to have to take a different tack.

“When it comes to the Sumatran Rhino, it’s been made pretty clear to us by Indonesia that the biological material needs to stay in-country,” said Terri Roth, who heads the CREW research facility at Cincinnati Zoo and pioneered the process of breeding Sumatran rhinos in captivity. “If assisted reproduction is going to be done with Sumatran rhinos, it needs to be done at laboratories that are in Indonesia, with experts in Indonesia who know how to do what needs to be done. And that’s just the way it is.”

While Hildebrandt has helped train local experts on many aspects of rhino ART, from safely administering anesthesia to identifying oocytes, he said the process of collecting eggs from a rhino isn’t something a vet can simply be trained to do overnight.

“It is not easy to repeat what we do because it requires a lot of experience,” he said. Were it more straightforward, “there would be many more teams performing it.”

The anatomy of rhinos — both northern white and Sumatran — makes egg extraction an incredibly delicate process, one in which the risk of puncturing a major blood vessel is high. One false move by inexpert hands can kill the rhino. And with so few left, that’s a gamble that Hildebrandt finds hard to take.

“Some of the techniques we perform can be dangerous if you do not have the knowledge we have,” he says.

“There’s this tendency for experts to say, ‘I’m the expert, I need to do it, or I need to do it in my lab,’” Roth said. Since it’s not going to happen that way, the best thing experts can do now is focus on sharing their knowledge. “We have to think about who is best suited to train and prepare some other people and some other labs to do this.”

While collaboration has occurred over the years, competition among researchers has hampered knowledge sharing, Roth said. As scientists are increasingly responsible for finding funding for their work, the pressure to be the first to achieve a breakthrough has become more intense. “When we’re always challenged with trying to raise money, then we become a little bit more like marketing people. We’re trying to market our work, and market how good we are.”

One benefit of Indonesia’s tight restrictions on its rhinos, she says, is that it cuts down competition for headline news.

But Muhammad Agil, a veterinarian and faculty member at the Bogor Institute of Agriculture in Indonesia, attributes the hold-up to something even more powerful than international rivalry or government foot-dragging: COVID-19.

According to Agil, the Indonesian government is well aware of the critical importance of ART, and has requested that Agil and his colleagues assemble a team to begin the program in earnest. In collaboration with Hildebrandt, Roth and others, Agil said they were doing just that, and had even identified a viable female Sumatran rhino from which to harvest the eggs. Then, COVID-19 struck.

“We had to stop all the preparations we already discussed,” he said.

COVID-19 may have slowed progress, but it hasn’t stopped it. Currently, there are plans in place to assemble a subcommittee of the Sumatran Rhino Husbandry and Propagation Expert Advisory Board, which will focus exclusively on developing an ART plan for Indonesia’s Sumatran rhinos.

Though the subcommittee is still in development, Hildebrandt said it’s important to get everyone in the same room as soon as possible, even if they aren’t necessarily on the same page.

“We’re not always friends,” he said. But to lose the rhinos over personal differences would be “very tragic for the rhino, because they have nothing to do with it.

“We have a common goal, and we want to save the Sumatran rhinos for the next generations, and I think it’s our responsibility to do that.”

This article by Lauren Evans was first published on Mongabay.com on 6 July 2020. Lead Image: One of two rhino calves born at the Sumatran Rhino Sanctuary in Indonesia’s Way Kambas National Park. Seven Sumatran rhinos are currently held at the SRS, including two rhinos born in captivity at the Cincinnati Zoo, and two born at the sanctuary. These births have renewed hope that the species can breed in captivity without resorting to ART. However, all of the male Sumatran rhinos currently in captivity are closely genetically related. Image by Rhett Butler/Mongabay.