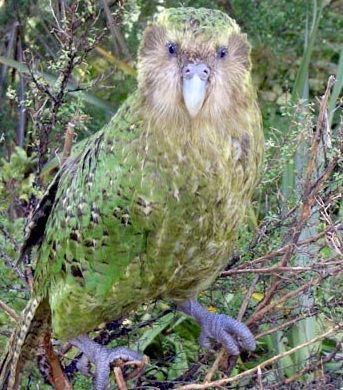 Several years ago, a story emerged about a Kakapo parrot who gained a bit of fame due, in part, to the International Union for Conservation of Nature (IUCN) Red List designation of the flightless bird from New Zealand. The listing delivered an alarming Critically Endangered label, which is literally ‘next door’ to the near hopeless “Extinct in the Wild” designation.

The parrot of this story is named Sirocco. At the time of his budding notoriety, he was just one of 148 Kakapo parrots known to exist in the wild. Sirocco hatched in 1997 and was fitted with a transmitter for scientists to monitor the male parrot in his wanderings of one of several secret islands located in the Marlborough Sounds. In 2016, things got scary when Sirocco’s transmitter quit working.  For two years, Sirocco remained  “off-line” and undetected.

In 2018, New Zealand Department of Conservation rangers set out on a determined seven-day search to relocate the parrot in the hope he was still healthy. The bird was relocated, and his broken transmitter was refreshed for further observation of the bird. With his re-acquisition, Sirocco has taught observers several things previously unknown about the kakapo parrot. In 2013, an award-winning documentary film was created, called Sirocco – The Film. Another award-winning documentary was made called Sirocco – How a Dud Became A Stud (by Indian filmmaker, Ashwika Kapur). Now, fast-forward to 2020 for an update on the famous parrot, who is also the official New Zealand advocate for kakapo conservation.

More of a Spokesbird than a Romeo

Today, Sirroco is 23 years old. During his time, he has confounded conservation efforts by remaining celibate in his wandering years. Surprisingly, he is also the only kakapo exhibiting this unusual behavior. The reason for this is that Sirroco was raised away from the other parrots, which resulted in him imprinting on humans rather than his own kind. With this, Sirocco has come to have no interest in kakapo females to properly mate.

These days, Sirocco is treated much more like a VIP than just one of the birds. As an assigned advocate, he is actively busy championing the cause of the kakapo parrot and their surging numbers over the years. Because of his station, an insurance policy has been taken out that insures Sirocco the kakapo for an astonishing $79,500. (Arrival at this figure considers food, care, housing, and travel on an annual basis.)

Sirocco has a Facebook page that currently enjoys a large number of “likes,”with more than 235,000 followers (see here). It is the face and persona of Sirocca that is used on anything related to birds (of any kind) in New Zealand. His popularity is high in the country as a visit to his Facebook page reveals.

Today, Sirocco is part of a thriving kakapo community of 210 adults. All adults are spread out through four secret island locations. Each bird is electronically tagged for easy monitoring, and each bird has a name that they are known by. And each bird is fiercely protected in the hope that one day soon, the kakapo will flourish once again.