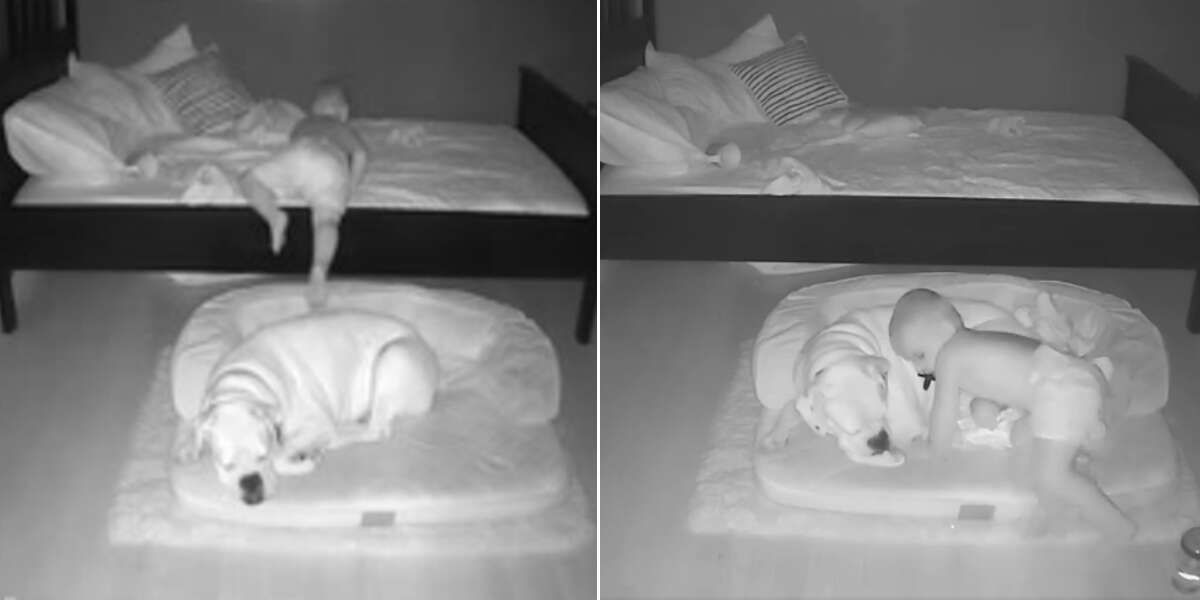 “Finn sleeps with Brutus all night, every night” ❤️️

Shortly after finding out she was pregnant with Finn, Paige Knudtson adopted a 2-year-old boxer named Brutus from a local rescue. Having grown up with boxers, Knudtson knew how gentle they could be. But she could never have anticipated what a big part of her baby’s life the dog would become.

“Brutus is just a big teddy bear,” Knudtson told The Dodo. “He loves attention and loves to snuggle with people.”

When Knudtson was 20 weeks pregnant with Finn, an anatomy scan revealed a serious heart defect. Finn underwent multiple procedures immediately after his birth until he could have open-heart surgery. “We were extremely lucky to have found this out prior to his birth, or he would not be here with us today,” Knudtson said.

After seven weeks, and a few complications, Finn was finally able to go home. And when Brutus met his baby brother, the connection was instantaneous. “Once we got home, it was as if Brutus just knew Finn needed some extra close monitoring, and he has been by his side ever since,” Knudtson said.

The two adore each other and spend every moment together — watching TV, playing outside, eating and napping.

“Brutus often curls up wherever Finn is sitting and follows him from room to room in our house,” Knudtson said. “If Finn is sick, Brutus knows it and just stays right by Finn’s side or lays his head on Finn’s chest.”

Brutus hates to be separated from Finn, even for a moment, and will scratch at the door to Finn’s room or pace outside it until he’s allowed in.

The brothers don’t even like to be alone at night.

When Finn was a baby, the protective dog slept on the rug in front of the crib, and now that Finn has moved to a toddler bed it’s much easier for the two to snuggle up.

“Finn just started sleeping in his ‘big boy bed’ a little over a month ago and that is when Brutus began crawling up and sleeping in Finn’s bed every night,” Knudtson said. “It was as if he laid next to him to prevent him from rolling out of bed.”

Wherever Finn goes, Brutus follows — even if that means being a little less comfortable. “Finn then began climbing out of his bed and sleeping on his floor, so naturally Brutus began sleeping next to him there as well,” Knudtson said.

Now that Knudtson has moved Brutus’ dog bed into Finn’s room, Finn will often choose to snuggle up with Brutus in his bed rather than stay in his own.

Knudtson was recently able to capture their sweet nighttime routine with a nanny cam. If Brutus is sleeping on the floor, Finn will grab his blanket and climb out of bed, in order to snuggle up next to his buddy. The gentle dog doesn’t mind being used as a pillow, as long as his brother is comfortable.

You can watch the adorable video here:

Now the whole family just expects to wake up and see Finn and Brutus curled up together: “Finn sleeps with Brutus all night, every night,” Knudtson said. “Whether it’s in the dog bed, Finn’s bed or the floor — the two always sleep together.”

Knudtson is so happy that Finn has a best friend and protector in Brutus, and can’t wait to watch them grow up together.