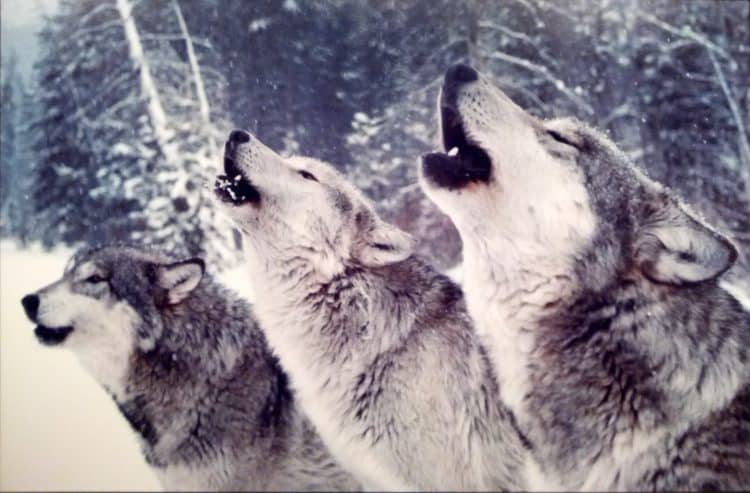 New research by a team of biologists, seems to support critics who have long argued that wolves are being sacrificed unnecessarily in efforts to save mountain caribou in British Columbia and Alberta from the growing threat of extinction.

Since the 80s, authorities in the two provinces (Canada’s westernmost) have been conducting “culls” which have probably killed thousands of wolves since then.

Culls involve either shooting the animals from helicopters, poisoning them or, in at least one case – an eight-year campaign of sterilization.

Yet caribou populations all over Canada, continue to plummet. Thanks to declines in all sub-species, they’re now classified, nationwide as either threatened or endangered. Some of the steepest reductions have occurred in mountainous regions in the two provinces.

A few years ago, the ungulates were declared extinct south of the border, in the continental United States. Now, a team of experts from western Canada, is taking aim at a study published last year.

It supports culling and the penning of pregnant caribou as ways to slow or stop their slide toward extinction. Such findings have been used by governments to justify their “predator control” policies.

Yet the newer research states flatly, there’s simply no “statistical support” for that. While wolves may account for more than half of caribou predation in other places, “Deep-Snow Mountain caribou” are far less likely to be killed by wolves than by other predators.

These herds live in southeastern BC, where, as their name implies, winter snows can pile up to three meters deep. Yet their numbers have crashed an alarming 45% in recent decades, possibly the steepest decline of any caribou ecotype in the world.

“Wolves do not comprise the primary source of mortality for Deep-Snow Mountain caribou,” the report finds, “constituting only 5–10% of verified cases of mortality – in fourth place after cougars, bears and wolverines.” The authors point out, therefore, that it’s wrong to apply a “one-size fits all” approach when it comes to wolf culls.

Besides, cullings ignore a long-accepted reality. It is loss of habitat due to human activity such as logging, which is the main driver of population decline.

“Despite warnings that industrial resource extraction, primarily forestry, was detrimental to maintaining viable caribou populations, habitat modification, fragmentation and associated road-building increased over subsequent decades.” Since the “Deep-Snow” herds depend on lichen that grows on old growth trees, above the snow-line for food, their world is therefore “especially incompatible with large-scale clearcut forestry.

“Logging,” the study goes on, “leads to increased predator densities and greater access to caribou via clearcuts, roads, snow compacted by snowmobiles, and the loss of forested refuges. Snowmobile and heli-skiing harassment are pervasive across the range of Deep-Snow Mountain caribou and impose potential harm during winter and spring calving. Snowmobile harassment has been acknowledged as an increasingly important factor in Deep-Snow Mountain caribou winter ecology.”

The study’s lead author, biologist Lee Harding, believes the importance of wooded habitat to caribou survival, cannot be overstated. ”Forests provide caribou with refuge from wolves and separation from other prey animals, including elk, moose, and deer. Without them, caribou must constantly be on the move to find food, exposing them on all sides. Predators are just one of the hazards.” The need for conserving caribou populations, warn the authors, “is now urgent and carries large economic, ecological, cultural and social implications.”

I’m a veteran eco-journalist living in Shoal Lake, Manitoba, Canada. I have a life-long love of wildlife & natural places. After working for radio and TV stations for about 30 years, I’ve turned to science writing as a freelancer specializing in the Earth Sciences. I’m a member of the Science Writers & Communicators of Canada and the American Association for the Advancement of Science. I’m authorized to receive embargoed material through the Science Media Centre of Canada, the Royal Society, NatureResearch and the World Health Organization. This allows me advance access to important, peer-reviewed research often warning of habitat loss and the threat of extinction facing many wild species, usually thanks to human intrusion and intervention by the hand of man. They then often become “hot-off-the-press” stories which are ready to publish the moment the embargoes are lifted. I publish www.PlanetInPeril.ca (PinP) “Where Science Gets Respect.” I own professional photographic gear and am sometimes able to enhance my stories with my own images.