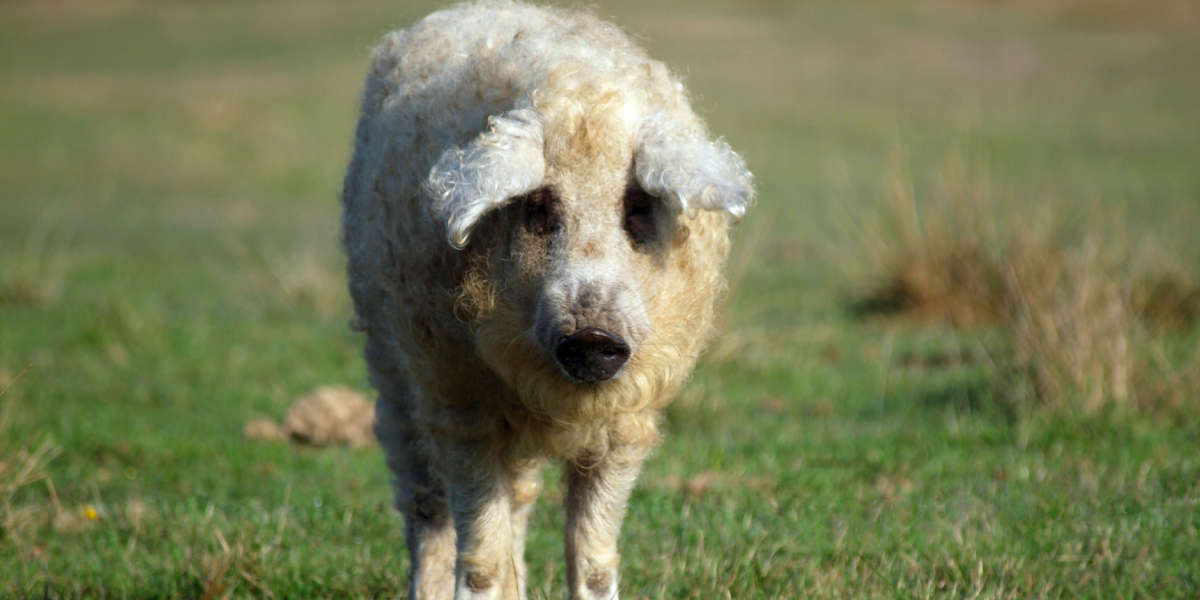 Angus has a unique look that makes him stand out from the crowd.

The 3-year-old Mangalitsa pig, a breed known colloquially as “the pig-sheep,” is covered in thick, curly hair during the winter months. His coat is double-layered like a dog’s, with long wiry hair protecting a soft, fluffy undercoat.

Angus came to Peace Ridge Sanctuary in 2018, skinny and neglected. The boar lived in horrible conditions on a farm in a neighboring town until state agents with the Maine Animal Welfare Program rescued him.

It didn’t take long for Angus to start putting on weight at his new home — and now the happy pig is living his best life.

“When he first came in he was pretty nervous, but he’s now a large and bossy pig,” Melissa Andrews, director of development, humane education and outreach at the sanctuary, told The Dodo.

“The Mangalitsas are a Hungarian heritage breed and they almost look like sheep when they have their full winter coats on,” Andrews said. “Then they shed the entire coat in the summer and are pretty close to bald. So it’s a pretty big transformation watching him throughout the year.”

Angus’ woolly coat is about 4 inches long when fully grown. The curly outer layers feel coarse, like a horse’s tail. Andrews knows from experience since Angus loves to flop over on his side for belly rubs when he sees a sanctuary staffer nearby.

The Mangalitsa — sometimes spelled Mangalica — is one of the oldest pig breeds in Europe. Created by crossing Sumadija pigs with semi-wild Bakony and Szalonta pigs in the 1830s, it quickly became the most popular pig breed in the Austro-Hungarian empire.

By the early 1990s, fewer than 200 Mangalitsas were left in Hungary. But they’ve seen a resurgence in popularity recently due to interest in farming them.

But, luckily, Angus doesn’t have to worry about any of that.

Angus spends his days dragging branches around the sanctuary to make little forts and nests for himself and taking mud baths with his friends. “He lives in a small group with two other large pigs,” Andrews said. “He likes to sleep next to them at night, and go on little adventures with his best friend Wilbur.”

“He taught Wilbur how to be a bit naughty,” Andrews added. “Wilbur was one of our best-behaved pigs until he met Angus and then Angus was like, ‘Hey, let’s cause trouble.’”

Angus and Wilbur off to cause some trouble. | Peace Ridge Sanctuary

Angus may look different from the other pigs at the sanctuary, but at heart, he’s just a normal guy.

And after his difficult start, he makes sure to keep all his friends safe from harm. “He’s very pig-like, just like all pigs — they’re really smart, they’re really clean and tidy,” Andrews said. “He watches over the other pigs in the group and as the dominant pig he’s really protective of his little friends.”