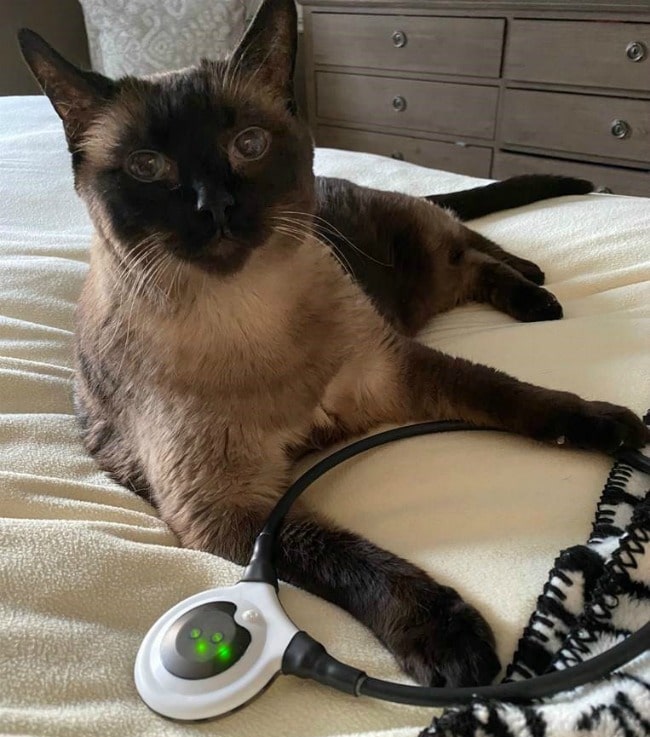 11-year-old Doodie came into Sue Marshall’s life five years ago. Sue had just arrived in the US from Australia, and since her work schedule was quite fluid, she wanted to find a shelter where she could volunteer during her free time. There was a photo of a gorgeous Siamese cat on the front desk. The special needs cat had been at the shelter for five years after being returned several times because her multiple illnesses were too much for adopters. “She looked so sad,” said Sue, “so I asked if I could foster her. At first, the shelter declined, as they were wary of letting her go home with just anyone. Sue persisted and returned again and again. Finally, the shelter agreed to a short term foster arrangement, and Sue took her home.

“After 12 days of having her in our home, we returned her to the shelter as planned,” said Sue. She pointed out Doodie’s cage to her husband, who put her carrier on the desk and said to the shelter owner “so how do we make this official?” “I squealed with so much joy!,” recalled Sue. “I won’t lie, they did seem confused we wanted her. She is my little slice of heaven. I can’t imagine life without her.”

“Over the three years we have had her, I have tried everything to stabilize her,” said Sue, “from steroids to herbal supplements. The more natural her treatments were, the better the success rate.” Keeping Doodie’s stress low, as stress triggered everything to flare up, changing her diet and water to purified water, using homeopathy remedies made by Dr Charles Loops DVM and herbal supplements like Marshmallow root, Mirica -PEA (palmitoylethanolamide with levagen), organic Shiitake mushroom powder with probiotics and daily Assisi Loop treatments all contribute to giving Sue’s little girl her best life!

“We have stabilized most of her issues with only occasional herpes flare-ups when she becomes stressed,” says Sue. “We are now bringing her weight back down after long term steroid use. She has lost four pounds and is moving better.”

A once daily Loop treatment seems to be the sweet spot for Doodie. “The very first time she got up and walked away,” says Sue. “She can be a stinker!” Sue found the key to starting her off in accepting the loop was to place it on her when she was already tired and sleepy. “Now she is used to it and raises her head to look at me, then she lowers it and goes back to sleep.”  Sue adds that she can tell that Doodie’s limp is a little more pronounced when they don’t use the Loop. “If we use it once a day, you can barely notice she has an issue.” Sue says when she has used up the Loop (the Loop offers a minimum of 150 15-minute treatments,) she will definitely purchase the therapy pad. “I purchased the Loop on my vets recommendation, and I wasn’t so sure it would work for her ailments, so I started off with the smaller PEMF device,” said Sue. “I’m so confident now that it works that I would for sure purchase the pad next time.”

Sue is impressed with the results of the Loop. “It’s an impressive drug free modality to use for overall wellness and healing. Her inflammation levels are high and this definitely helps to bring them down. You can actually see the change in her gait when she walks. In addition to less limping, Doodie has more energy, and her face looks brighter. Her paws look clearer and less cracked.” Doodie also seems happier and more confident when she walks around the house. “She comes down the stairs two or three times a day now, whereas previously her knee pain kept her from moving too much and she was sleeping most of the day. She is definitely more social.”

How the Assisi Loop Works

The Assisi Loop, created by Assisi Animal Health, is a non-pharmaceutical, non-invasive device provides targeted pulsed electromagnetic field therapy (tPEMF™). tPEMF, which was first studied in the 1970s and is FDA-cleared for use in humans, uses low-level pulses of electromagnetic energy to stimulate the body’s own healing mechanisms to help relieve pain and swelling. This therapy can benefits cats with pain associated with arthritis, pancreatitis, wounds, or post-surgical swelling as well as many inflammatory conditions. The Loop is well tolerated by most cats. In fact, many cats really enjoy receiving Loop treatments. Because the Loop stimulates the body’s own healing process, rather than introducing a new substance (like a medication), even a sensitive cat body can handle it easily.

Featuring the same pain control of the Loop via targeted pulsed electromagnetic field therapy (tPEMF™,) the Loop Lounge™ is the only therapeutic pet bed backed by scientific research. Click here to read more about the Assisi Loop Lounge.

*FTC Disclosure: This is a sponsored post, which means that I was compensated to feature this content. Regardless of payment received, you will only see products or services featured on this site that I believe are of interest to our readers.