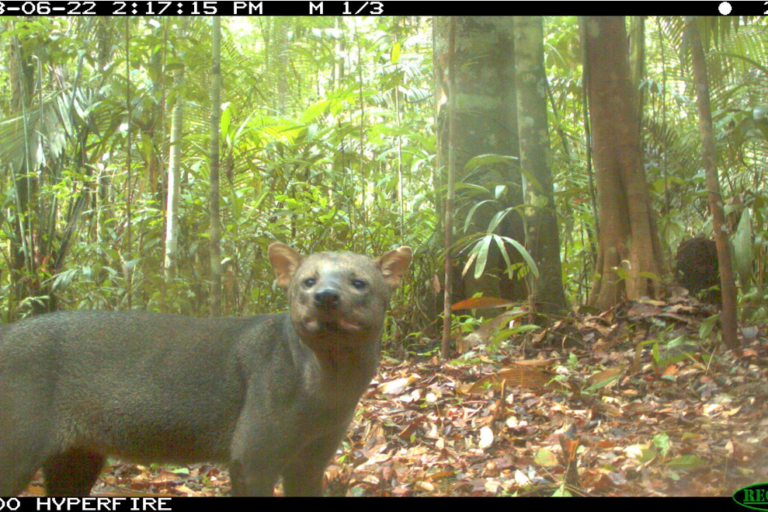 It’s a warm May morning in 2015, and beneath a chorus of birds and insects, a small gray-brown dog plops down in front of a camera perched in the Amazon rainforest. Long-bodied and muscular, at first glance the dog looks a bit more like a weasel than your neighborhood golden retriever.

But there’s something endearingly familiar about its clumsy pose, the way its ears flick back and forth, the lively set of its eyes as it glances into the camera.

Yet unlike man’s best friend, you could live your entire life in the Amazon and never see this canine: Atelocynus microtis, the short-eared dog.

The video is one of more than 300 records of the short-eared dog gathered in a new paper in the journal Royal Society Open Science, which provides fresh insight into the distribution of this rare species —found only in the Amazon rainforest — and the threats it faces from human activity.

Based on predicted deforestation rates for the coming decades, the research finds that at least 30% of the short-eared dog’s current habitat, which stretches across Amazonian Brazil, Bolivia, Colombia, Ecuador and Peru, could be lost or sharply degraded as soon as 2027. In some places, that loss could be higher than 60%.

“The short-eared dog plays an important role in this large ecosystem, in ways we don’t even totally know,” said study co-author Renata Leite Pitman, affiliated scholar in the Nicholas School of Environment at Duke University and one of the world’s few experts on the short-eared dog.

To assess the habitat used by this rare dog, the research team, led by University of California, Davis, graduate student Daniel Rocha, set up four camera trap surveys across several different habitats within the southern Brazilian Amazon. Over the course of 18 months, these cameras automatically snapped photos of any animal that lumbered, trotted or scurried past, including the elusive dog.

A solitary species, ranging across wide tracts of dense rainforest, the short-eared dog has historically been difficult to research. But camera traps offer an ideal solution.

“For the first time, we have a technology that can help us detect species unequivocally, in a place where it’s very difficult to see anything,” said Jorge Ahumada, an ecologist with Conservation International who works extensively with camera traps but was not involved in this study. “Camera traps have removed that barrier. They are your automatic field assistant, always out there ready to take a picture, day or night [while] the animal doesn’t think there’s anything around.”

Rocha’s team paired their camera trap images with a database of short-eared dog records from the last 20 years, including more than 200 camera trap images from 50 researchers, as well as verified sightings, dead specimens, and vestiges like scat.

The researchers then fed the data into computer models that could estimate where the short-eared dog population was distributed, as well as how distribution may change under different climate and deforestation scenarios.

These models found that short-eared dogs inhabit a wider swath of the rainforest than previous studies suggested, ranging west to the Andes Mountains, north to the Amazon River, and south and east to the very edges of the rainforest. The largest portion of their population was centered in Brazil, followed by Peru. The dogs were most closely associated with dense forest cover, shying away from forest edges.

As such, it’s of little surprise that the models predicted the short-eared dog will likely suffer severe habitat loss from deforestation. Forest loss will affect an estimated 40% of its habitat in non-protected areas, and more than 60% within some interfluves, or specific regions between rivers.

“The major problem in conservation of the Amazon is because it’s a mosaic of protected areas and private areas,” Pitman said. “The private areas are the areas being burned and attacked and destroyed, more so than the protected.”

In other words, protected forest can only do so much for a species that ranges widely across this patchwork.

There’s a bright spot, however: this research could provide a path forward to preserve the short-eared dog. Pitman has spent several years trying to convince the IUCN to change the short-eared dog’s Red List status, currently at near threatened, to vulnerable, a classification that may help conservationists push for greater protection in its range.

By showing that the short-eared dog is both more widespread and more threatened than previously thought, “all the data that we got together should help to change the status of this species, which I think is really vulnerable, and has been really vulnerable for the last decade,” Pitman said.

Short-eared dogs are fond of the large Brazil nut, which is also harvested wild for human consumption. Video by Renata Leite Pitman.

What’s more, losing this species could have repercussions beyond the little gray-brown dogs themselves. Pitman’s work discovered that the short-eared dog diet includes a hefty portion of fruit, the seeds of which the dog disperses throughout the rainforest. That diet includes Brazil nuts, which short-eared dogs eat eagerly as well as bury to eat later, likely dispersing the seeds. People harvest brazil nuts exclusively from the wild for consumption all over the world. That means the short-eared dog could play a role in an industry that brings an estimated $44 million to South American economies every year.

“Brazil nut tree survival depends on seed dispersers,” Pitman said, noting that the short-eared dog’s ability to carry nuts far and wide likely contributes to their survival. “Since the species range of both species greatly overlaps, the conservation of both species might be linked.”

For Pitman, it’s a topic that’s especially close to her heart: she spent around two years studying a semi-wild short-eared dog puppy named Oso, who was illegally sold at a local wildlife market. Oso provided unprecedented insight into his species, from how they avoid predators, to their late-blooming sexual maturity at the age of 3, to that fondness for Brazil nuts.

In 2010, when Oso was mature, Pitman and her colleagues fit the dog with a tracking collar and sent him trotting back into the wild. They watched as he headed northeast, into a remote piece of forest inhabited by Indigenous tribes who remain isolated from the outside world: exactly the kind of forest where the short-eared dog might find protection. If Oso’s kind is to survive, the Amazon will need more of it.

This article by Claudia Geib was first published on Mongabay.com on 28 July 2020. Lead Image: A short-eared dog pauses before a camera trap in the Amazon rainforest. Camera traps, which trigger remotely, have provided an unprecedented new look into this elusive canine. Image by Mark Abrahams.