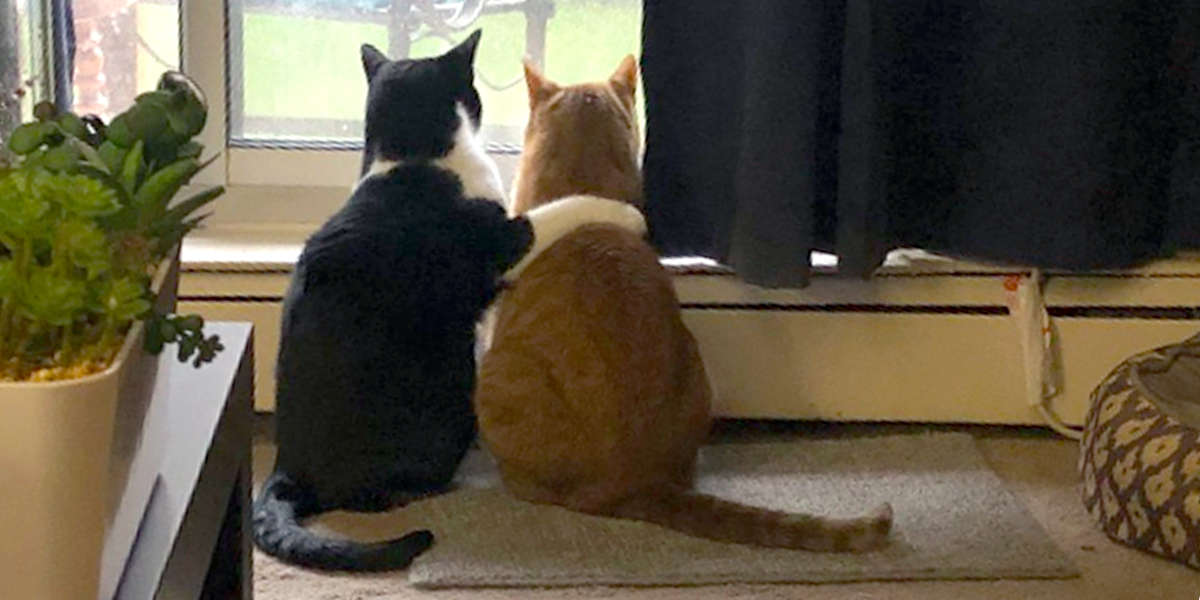 “They are brothers and very much act like it” ❤️️

With four rambunctious rescue cats, Emma Patricia’s house is rarely quiet. The cats all love to play and wrestle with each other, especially Norman and Noah.

“My little sister actually found Noah when she was on a canoe trip. He was down on the riverbed and I came and got him and he never left,” Patricia told The Dodo. “They are brothers and very much act like it.”

Ever since Noah joined the family, Norman has made it his job to take care of his adoptive brother. “They love to be close to one another,” Patricia said. “Generally, where you find one, the other is close by.”

One Saturday last month, Patricia was taking advantage of a rare moment of quiet to have breakfast and read a book when it started to storm. She glanced up to look out the window and caught her two cats in a secret moment of brotherly love.

Just minutes before, they had been wrestling on the floor — but now they sat side by side, with Norman seemingly comforting Noah.

“The boys love to sit and watch the rain in the window,” Patricia said. “I didn’t think anything of it but then I looked over a few minutes later, and Norman had his arm around Noah and they were just sitting there like that watching the storm.”

Patricia managed to snap a quick picture and post it to Twitter before heading out to work. By the time she got home, her post had gone viral. She was glad the special moment had brought so many people joy.

It isn’t rare to catch Norman and Noah being kind to one another, but she had never caught them supporting each other in such a sweet way before. “They will hug each other like that to groom one another,” Patricia said. “But to just sit like little thunder buddies that way — never!”

Patricia couldn’t be happier that not only are Norman and Noah brothers, but they’re clearly best friends.