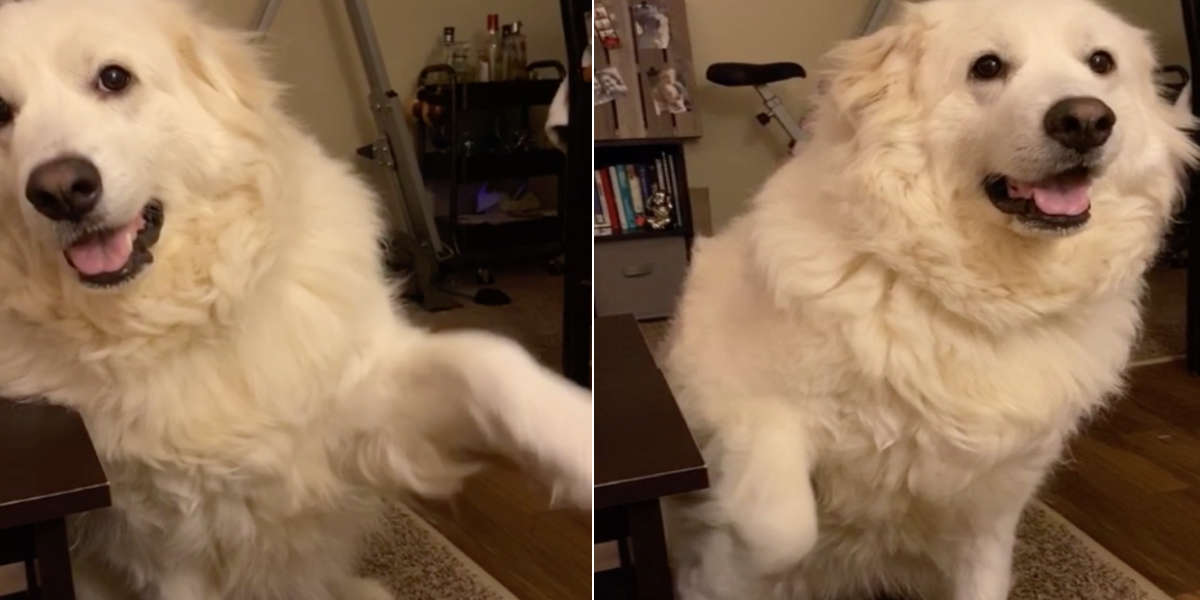 Lyla is a 6-year-old Great Pyrenees mix, and she doesn’t mind if you think she’s lazy.

“If I could put her general demeanor into two words, they would probably be ‘disinterested’ and ‘stubborn,’” Nicole McCue, Lyla’s mom, told The Dodo. “She’s one of the only dogs I’ve ever met who does not enjoy playing with toys and often even rejects my attempts to take her outside for a walk, especially if it’s a hot day.”

When McCue got Lyla as a puppy, she figured that training the dog would be a breeze. “She was able to retain ‘sit’ and ‘paw’ with ease,” McCue said. “Then it was like we hit a wall.”

After taking the trouble to learn paw, it seemed like Lyla had decided that her work was done. For years, McCue spent 30 to 45 minutes a day trying to help Lyla master “down,” but the dog couldn’t seem to grasp the concept — or, more likely, didn’t want to.

“Paw” has since become the dog’s favorite trick, and she shows it off in every situation possible. Even better for Lyla, it takes little to no effort to perform.

“Lyla is extremely stubborn and likes to exert as little energy as possible,” McCue said. “Her solution to everything is ‘paw.’ She wants to go outside? Here’s a paw. Wants something I’m eating? Paw. Wants to be pet? Paw. The list goes on!”

“I’m not sure why ‘paw’ stuck with her so aggressively; a lot of people have been telling me recently that it’s a breed trait,” McCue said. “To this day, she raises her head and smiles pridefully whenever she provides her paw.”

“She also doesn’t like her paw to be ignored and will continuously hit you with it if you do ignore her,” she added.

Though Lyla will never have a long list of tricks in her repertoire, her mom doesn’t mind. If there’s one thing Lyla’s an expert at, it’s loving her family.

“Besides the general stubbornness, this girl is a love bug,” McCue said. “When she’s not busy protecting the house, she’s snuggling with me. She loves to spoon, loves a good ear rub and loves naps.”