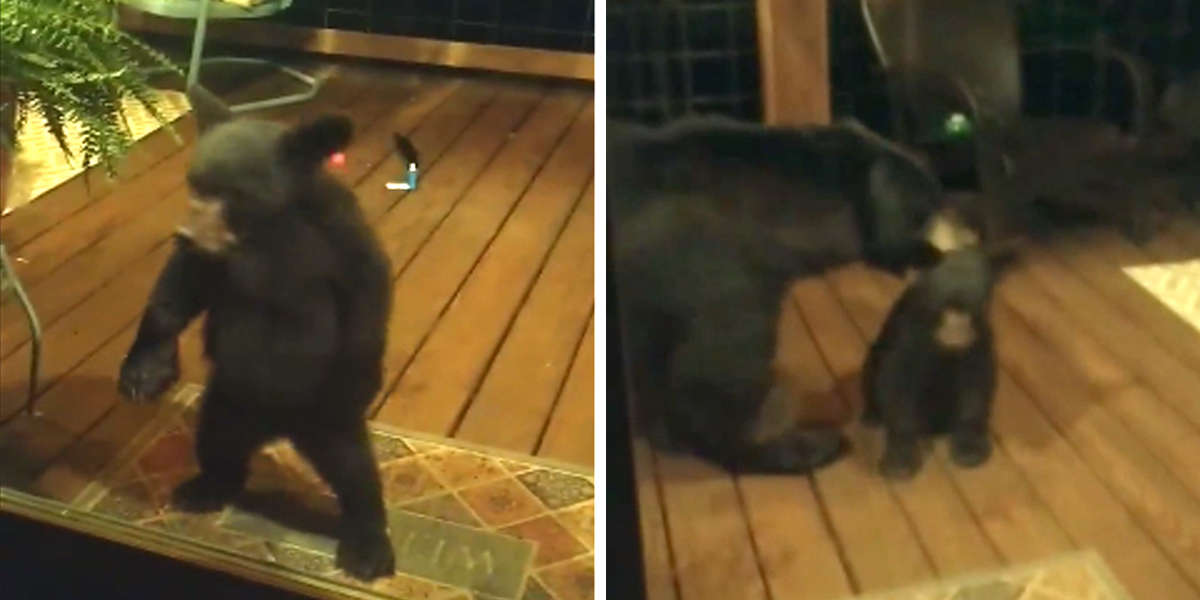 Early the other morning, Sumer Walser Williams and her husband were woken up by the sounds of an adorable visitor to their North Carolina home.

Turns out, it was the cutest Peeping Tom.

“We heard clanging outside our bedroom window that backs up to our front deck,” Williams told The Dodo. “Sure enough, when I put the front deck lights on, there was a cub at the front door.”

As Williams and her husband looked on in amazement, the curious cub stood upright and peeked through their window. Rather than be offended they were woken up at the crack of dawn, the couple was delighted.

“We remember thinking, ‘This is totally cool,’” Williams said.

But not everyone was so pleased by the baby bear’s boldness.

After a few moments, the cub’s mom climbed up onto the deck — catching her baby in the act of what she evidently considers a “no-no.”

For Williams, herself a parent to two young children, the bear mom’s reaction to her wayward kid was one she understood completely.

“It was so relatable. That’s my daily experience with my own children,” Williams said. “I think that’s what made the video so great. It showed that some aspects of parenting are uniform across species.”

Williams imagines the bear mom’s message to her cub was something like this: “I have told you a hundred times not to bother people.”

Afterward, the bears wandered off into the darkness — ending a visit that Williams and her husband won’t soon forget.

Hopefully, the cub now understands that it’s best to keep his distance from people. But that wouldn’t be the only lesson learned.

“These visits are just reminders that we are just as much guests in their homes as they are to ours,” Williams said.