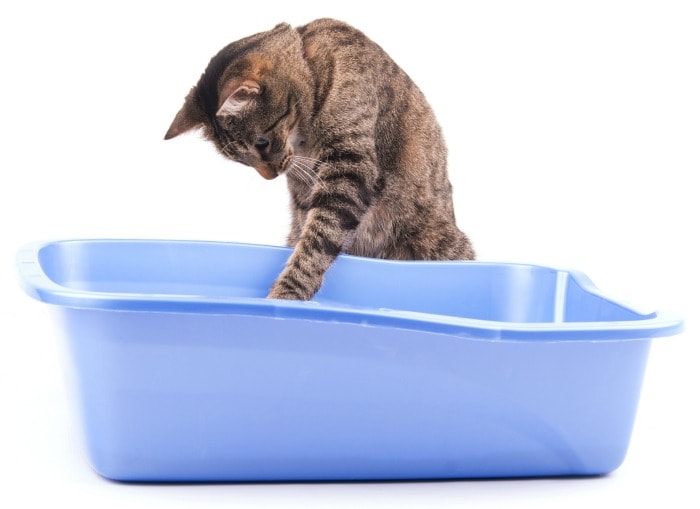 Peeing outside the box is often referred to as inappropriate urination, but it’s important to understand that from the cat’s perspective, this behavior is never inappropriate. There’s always a reason – and it’s not because your cat is trying to get back at you for something.

Anytime a cat stops using the litter box, a trip to the veterinarian should always be your first step. Inappropriate urination can be an indicator of a serious health problem. Your veterinarian will perform a thorough physical exam and a urinalysis. Bloodwork and radiographs may also be necessary to diagnose the problem.

Determine why your cat is peeing outside the litter box

For a step-by-step process of elimination to determine why your cat is not using the litter box, read What to Do When You Cat Pees Outside the Litter Box.

The difference between spraying and inappropriate urination

Cat parents often confuse urinating and spraying. Urine spraying is a territorial behavior. Cats stand upright and deposit a small amount of urine on vertical surfaces. Cats who are urinating usually squat and deposit larger amounts on horizontal surfaces. Even though both male and female cats spray, the behavior is mostly seen in un-neutered male cats, and occurs more often in multicat households, although even a single cat may spray. For more on spraying and how to stop the behavior, read Why Is My Cat Spraying and How Can I Stop It?

Urinary tract disease is one of the most frustrating conditions to diagnose and treat in cats. It’s not always possible to identify the exact cause, since most of the affected cats have more than just one single problem. A 2011 landmark study conducted at the Ohio State University on 32 cats over a three year period found that stress has a significant impact on lower urinary tract health. For more on this stress connection, read Does Your Cat Have Pandora Syndrome?

Once a cat has peed outside the box, he’s drawn back to the area and considers it an appropriate urination site, which is why it’s important to eliminate all traces of odor from the trouble spot. Our favorite product for this is the Jackson Galaxy Stain and Odor Remover.

The average cat uses the litter box three to five times a day. It would make sense that something that is used so frequently on a daily basis requires that we humans put a lot of thought into it. Unfortunately, cat guardians often select a litter box for all the wrong reasons – or at least for the wrong reasons from the cat’s perspective. Read The Optimal Litter Box for Your Cat to get a better understanding of what is important to your cat when it comes to the right litter box.

When all else fails

If you’ve tried everything and still can’t get a handle on the problem, you may want to consider working with a feline behaviorist. I can highly recommend Mikel Delgado http://www.felineminds.com/ and Dr. Marci Koski http://www.felinebehaviorsolutions.com/ Both offer remote consultations.

This post was first published in 2015 and has been updated.