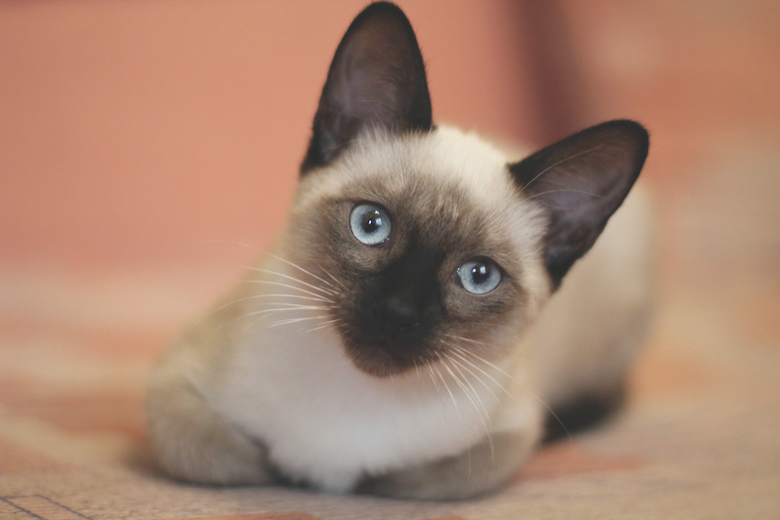 Though he may have the svelte good looks of a Siamese, this handsome fella is a Thai, and he is ready to take over your heart in 3, 2, 1 …

A breed of his own

The Thai, though frequently referred to as the Old-Style, Classic or Traditional Siamese, is a breed unto himself — at least for the last decade or so. In 2007, The International Cat Association (TICA) granted the gorgeous guy Preliminary New Breed status, followed by the coveted Advanced New Breed status in 2009.

In one word: physique. Though their pointed coloring and striking eye color is very similar, the Siamese is known for his sharply pointed head and sleek, slender, lithe frame. In contrast, the Thai has a wider head, making his oversized ears less pronounced, and is stockier and more muscular than his Siamese counterpart. If we’re talking resemblance, the Thai cat
is more synonymous with his ancestors, who maintained a round, robust, larger  look than the Siamese.

Originally from Thailand, the Thai’s official name is Wichienmaat, which roughly translates to “moon diamond.” Even more enticing … the Thai is considered a good luck cat!

Like the Siamese, the Thai loves to chitchat. And we’re not just talking vocalization. This cutie is not opposed to using a little body language to get his point across. Sticking his face in front of yours, tapping you with his paw, jumping on your shoulder — the Thai will talk any way he knows how. And he expects a prompt response!

Same difference, really. Emotionally, yes, he can toe the line of high maintenance, but this intelligent fellow loves his humans and wants nothing more than to bond with his beloveds. Thais want to know everything there is to know about you and to form a close, lifelong relationship. Is that really too much to ask?

Though the Thai is muscular and medium-sized (weighing between 8 and 15 pounds), he is graceful in his movements — balancing on miniscule beams and teetering on his tiptoes as he dances around the house, nosing into all of the things and accompanying you as you work on your daily chores.

Fun Fact: In 1886 the Thai was brought to England from Thailand as a gift to the royal family. These Thai cats
were dubbed the Royal Cats from Siam. Photo: Heinsbergsphoto | Getty Images

All species cat, really. The Thai is a highly intelligent kitty who lives for love. He does amazingly well in families, especially if there are children around to spoil him with cuddles. But he does just as well with the single folks who want a cat who will give them unconditional devotion and vice versa. Bonus: The Thai is flexible with friends and easily gets along with other species — he’ll even snuggle up with a playful pooch!

Due to the breed’s intelligence level, the Thai is a big fan of learning tricks and playing fetch — just like a pup. If you share your abode with both species, try training or playing with them together to ramp up the fun for everyone!

The first record of the Thai cat was in Thailand’s famous Cat Poems (Tamra Maew), circa 1350. The tome was an ancient collection of poems featuring 23 different cat breeds — 17 that were about cats rumored to bring good luck and six breeds noted for bringing bad.

Due to his short, sleek coat, the Thai is basically self-grooming. But it’s never a bad idea to give him a thorough brushing at least once a week to minimize shedding, get rid of loose hairs and keep hairballs at bay.

Though the Thai’s normal life span is 12 to 16 years, many live upwards of 20 with the proper veterinary care and, of course, love. So be ready for a long-lasting romance!