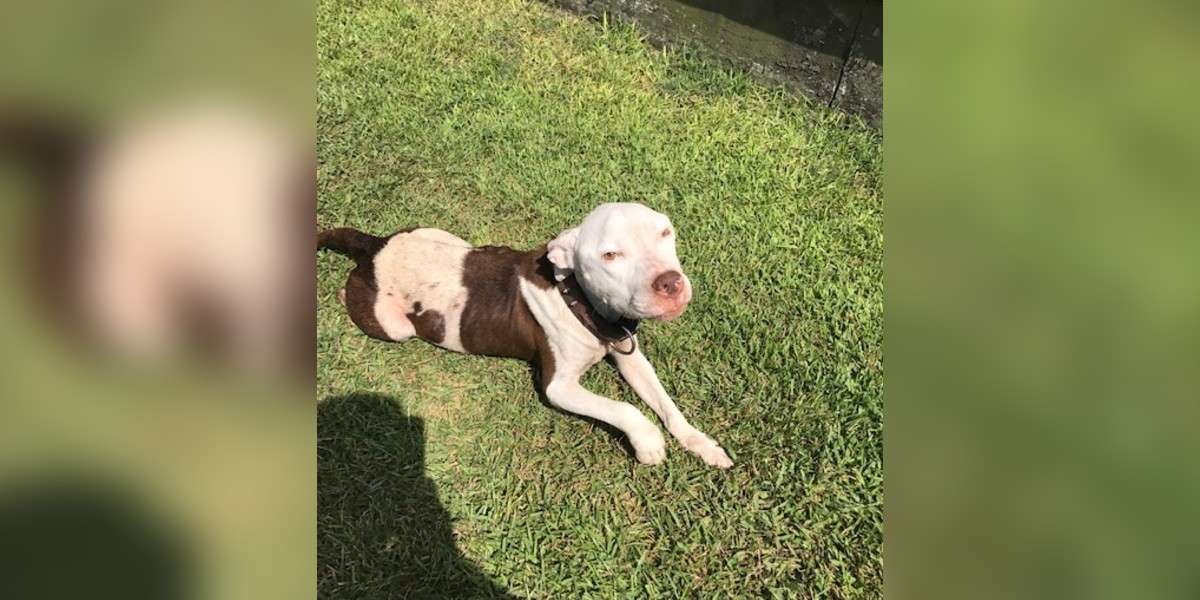 He picked the right yard 💜

Lakisha Smith was out running errands one morning when she realized she forgot something and drove home to get it. She called her daughter and asked her to bring it out to her, and was waiting outside when she suddenly noticed a pit bull sitting in her yard.

The poor dog looked like he was in rough shape, and as Smith and her daughter walked by him, he just stared. He clearly needed help — and was hoping he’d picked the right yard to find it.

Smith’s daughter walked over and carefully pet the dog, whom they decided to call Poppy. He happily accepted her love, and the family knew they couldn’t just leave him there.

“I told her to feed him because he looked like he was starving,” Smith told The Dodo. “He was thirsty and very dehydrated. When I came back from running errands, my husband Trey and our daughter Ja’Mya and I bathed him. He was infested with fleas, had thinning hair and was very dirty.”

Smith made Poppy a bed that night out of a large kennel she had, and tried to make him as comfortable as possible after everything he’d been through. The next day, she posted Poppy’s picture all over different groups on Facebook, and even took him to a local shelter and a vet to get him scanned for a microchip and see if anyone had been looking for him. The search for his potential owners came up empty — and Smith’s family was sort of relieved, because they’d already begun to fall in love with Poppy.

At first, Poppy was hesitant about his new home and needed some time to learn to trust again. He slowly began to warm up and bond with his new family, and it didn’t take long for his sweet, incredible personality to shine through.

Then one day, a man reached out to Smith on Facebook saying he was Poppy’s owner. Everyone was crushed, as they’d already begun to consider Poppy a member of the family. When the man arrived to claim Poppy, it was clear from Poppy’s reaction that he hadn’t taken the best care of him. After seeing how much Poppy loved the Smith family, the man decided to let them keep him.

“The guy walked away and said, ‘You have a good home now,’” Smith said.

From that moment on, Poppy was officially a member of the Smith family, and he couldn’t have been happier about it. Over the years, Poppy has struggled with some medical issues from his time spent living outside, and there were a few times where the vets said he wasn’t going to make it. But every time, Poppy pulled through — because he knew he had to make it back home to his family.

Poppy had no idea when he wandered into that yard two years ago how lucky he was about to get. He found himself the best family in the world, and now they can’t imagine their lives without him.

“We love our Poppy and he loves the Smiths,” Smith said. “He’s ours.”