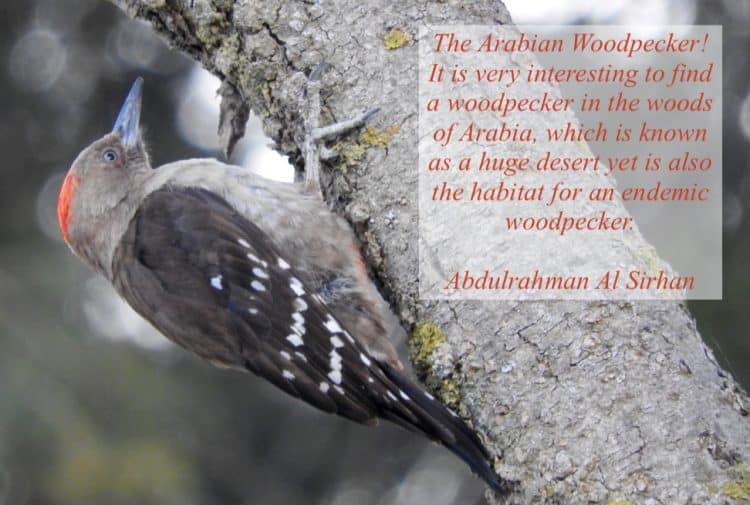 2019 was a great year for Saudi birding and not just because this was the year the Kingdom finally opened its doors to international tourism. 2019 marked the release of the Arabic version of the Birds of the Middle East (دليل الطيور في الشرق الأوسط) as an app for iPhone or Android. With the staggering scale of the annual illegal slaughter of birdlife in the Middle East, now more than ever is there a need to spread greater awareness of the region’s abundant avian treasures and the dire need to protect them. Thanks to the efforts of the Ornithological Society for the Middle East, Caucasus, and Central Asia (OSME) and Birdlife Middle East, who published the popular regional field guide, we’ve taken perhaps the most significant step in that direction. One figure who was central to this achievement was Abdulrahman Al Sirhan, a Kuwaiti birder, ornithologist, and photographer. The impact of Abdulrahman’s work on Saudi birding will continue to be felt as more Arabs become enflamed with the same passion that took hold of him as a boy. It’s for this reason that I hoped to interview him and I am greatly honored that he agreed.

SB: Abdulrahman, what is your professional background?

AS: I studied in the UK and got my BSc degree in 1985 from Manchester Polytechnic University in Electrical Engineering. I worked for the oil industry for some years and then turned to training technicians in college.

SB: And when did you first become interested in birds?

AS: My passion towards birds started at the age of 7. At that time it meant catching birds by trapping them alive during spring migration. I used to trap shrikes and wheatears around our house with my younger brother and in the public park close to my house. We used to put them in cages and then they died in a day or two. Later I started trapping and then releasing them at the end of the day. My father objected to bird trapping for my safety, so I used to save money to buy traps and do the trapping while he was taking his daily nap in the afternoon. I stopped this hobby at age 14.

SB: Then what led to you to eventually take up bird photography?

AS: In early summer of 2001 I took my children to a bookshop to buy them some books for the summer holiday. There I found a book in Arabic titled The Birds of Kuwait by Mishaal Al-Jraiwi (1999). It contained text and photographs of 103 bird species all photographed in Kuwait. All photographs included date and place, so I decided to see and photograph the same birds according to when and where they were photographed. At that time I had an SLR camera and a 300 mm lens that, when I bought it in Dubai in 1997, I experimented with by photographing Purple Sunbirds in Mamzar Park. On 25 August 2001, I started photographing birds at Jahra Pools Reserve from the outside and later met the gate keeper, who asked me to visit the EPA headquarters to obtain a permit. My website alsirhan.com was already established in June 2001, but it had nothing to do with birds or wildlife. It contained English language educational material. By September of that year, it became a bird photography blog, where I used to scan photographs from slide films to JPEG format and post them on the same day they were taken.

SB: So what’s your favorite Saudi bird and why?

AS: The Arabian Woodpecker! It is very interesting to find a woodpecker in the woods of Arabia, which is known as a huge desert yet is also the habitat for an endemic woodpecker.

SB: The woodpecker was definitely one of the biggest draws for me to consider living and working in Saudi. What would you say has been the most memorable birding you’ve done in Saudi?

SB: So I know you lead guided tours in Kuwait. What makes such a small Gulf country worth visiting?

AS: Well, Kuwait lies at the southeastern corner of the Western Palearctic (WP), a zoogeographical realm that some birdwatchers are interested in seeing all its birds. Being at the head of the gulf, Kuwait is a flyway for migrating birds that usually avoid migrating over the water. Kuwait also enjoys vagrancy from the east, which makes it an even more interesting place to visit for WP bird listers. Being a small country is an advantage for visiting birdwatchers because one spends more time finding birds rather than traveling! Also Kuwait’s two huge islands in the north are an estuary for the Shat Al-Arab river, which makes it an interesting habitat with 12 species of breeding birds.

SB: I was really excited when the Arabic version of the BoME came out. What role did you play in its creation?

AS: I translated the whole book from cover to cover and established criteria for naming birds in Arabic.

SB: What was it like being part of such a big project?

AS: I actually enjoyed translating the book! I used the accurate classical Arabic as well as more precise technical terms and bird names.

SB: Do you have any other projects in the works?

AS: A new book for the region.

SB: Excellent. I look forward to its release. So you know well the threats facing the birds of the Middle East. How do you think we can get more Saudis to put down their guns and pick up cameras instead?

AS: It is not easy to stop hardcore hunters from pursuing their hobby without turning their attention to other beneficial or at least less harmful alternatives, such as bird photography, or getting them involved in wildlife conservation as guides, especially experienced ones, or employing them with tight supervision in reserves so they have the chance to change. Law enforcement with severe punishments might also force them to seek other alternatives.

The scale of the killing, as evidenced through the work of CABS, is depressing. In the absence of strict enforcement, education and awareness building are perhaps the only other hope.

SB: And what about getting more young Saudis interested in their natural treasures?

AS: Education about the importance of biodiversity and wildlife conservation in general should start from early school years, actually from grade 1. Lack of knowledge of the latter will never trigger a conservation movement at all. This applies to all Gulf countries as far as I know.

SB: Hopefully such an emphasis on environmental awareness in the Saudi education system will emerge as part of the Kingdom’s 2030 vision. What’s your top wish for Saudi’s bird life by 2030?

AS: That they establish a Bird Records Committee and publish their list online. I wish to see more birdwatchers in Saudi Arabia, covering all the provinces. I wish to see environmental agencies involved in pushing forward birdwatching as a hobby and preparing the country for birdwatching tours.

SB: Inshallah. Thanks for all you’ve done, Abdulrahman, and hope to meet you in the field soon. Good birding!

You can also see Abdulrahman’s photography, learn about Kuwaiti birding, and contact him about guided tours of Kuwait at his other website—Birds of Kuwait.

Hello! My name is Gregory Askew. I’ve been living and working in the Middle East for going on 10 years now. I love exploring Saudi Arabia, particularly the wadis and mountains, and am now looking forward to more birders visiting the country in the hopes of tracking down some of Arabia’s wonderful endemic species. While now essentially rootless expats, we do have a foothold back home in the state of Texas, where I make it back for family and US birding time about once a year. If you’re interested in the birds of Saudi Arabia, check out my blog, Saudi Birding, on Facebook. You can find Saudi Birding on YouTube and Instagram as well. Good birding!