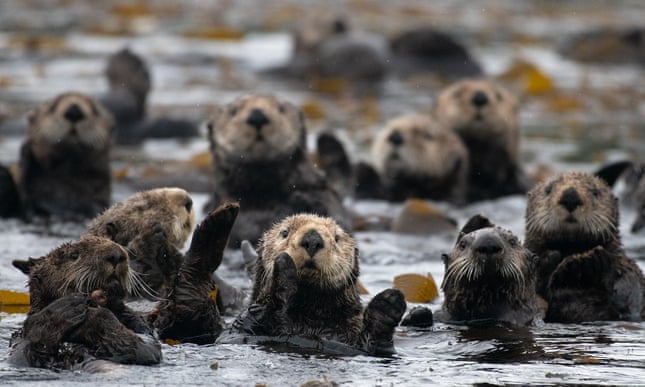 When Brent Hughes started studying the seagrass beds of Elkhorn Slough, an estuary in Monterey Bay on California’s central coast, he was surprised by what he found. In this highly polluted estuary, excessive nutrients from agricultural runoff spur the growth of algae on seagrass leaves, which kills the plants. Yet in 2010, Hughes noticed that the seagrass beds were thriving. It did not make sense.

“This is the highest nutrient concentration that I had ever seen on the planet,” says Hughes, a biologist at Sonoma State University. “Any model would suggest there should be no seagrass there and yet it was expanding.”

Hughes set out to solve the mystery. He examined every possible factor, including water quality, temperature and changes in seagrass coverage over time, going back 50 years.

He was not making any progress until he was approached by a boat captain named Yohn Gideon who had been running wildlife tours in the slough since 1995.

Over the years, the captain had handed clickers to his passengers, asking them to count the sea otters they saw.

When sea otter numbers went up, seagrass went up, too. “You don’t see that very often in ecology. That was a eureka moment,” he says.

While Hughes had often encountered sea otters in the slough during his dives, he never paid attention to them.

Now they were clearly linked to seagrass health, but how? 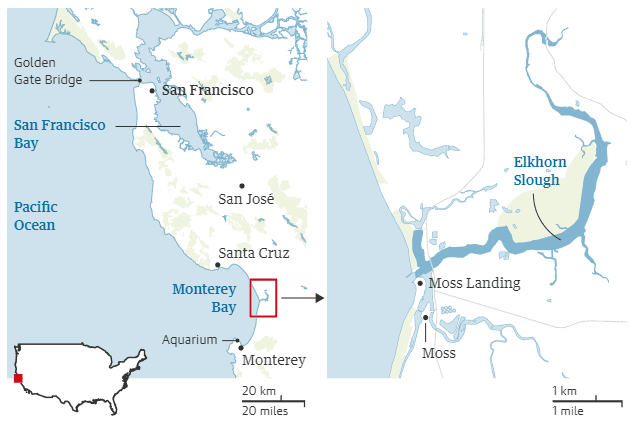 Sea otters may be North America’s smallest marine mammal, but they have a huge appetite. Unlike other species that rely on a layer of fat called blubber to keep them warm, otters use their dense fur and a high metabolic rate to maintain body heat in the chilly waters of the northern pacific. To achieve that, they must eat 25% of their body weight every day, munching on a variety of marine invertebrates, including sea urchins, clams and crabs.

When the otters first moved into the slough in the 1980s, they put their big appetites to work eating crabs. With fewer crabs to prey on them, the California sea hares – a sea slug – grew larger and became more abundant. The slugs fed on the algae growing on the seagrass, leaving the leaves healthy and clean.

Hughes had discovered a trophic cascade that had made the seagrass beds the healthiest of any estuary he had seen on the west coast. Since the otters arrived in the slough, the seagrass has recovered and increased by more than 600% in the past three decades.

Sea otters had already shown that they were capable of a large influence on the ecosystem. In the 1970s, biologist James Estes was conducting research in the Aleutian Islands in Alaska and noticed some areas where the seafloor was covered with sea urchins. As herbivores, urchins feed on kelp, and when their numbers are not kept in check by predators, no kelp remains. In contrast, in places where sea otters were present, kelp forests were thriving. Estes demonstrated that by eating urchins, sea otters created the opportunity for kelp to flourish. Sea otters gained their official title as a keystone species.

But the discovery that sea otters could also be important players in estuaries came as an ecological surprise. In fact, scientists had not even expected sea otters to survive in an estuary.

Hunted to near extinction by fur traders in the 18th and 19th centuries, sea otters had only survived in a few small, isolated populations in the North Pacific. Then, after the Fur Seal Treaty was signed in 1911, conservation efforts led to an increase in otter numbers. In California, the population grew from 50 in 1914 to about 3,000. On the coast of British Columbia, they were reintroduced between 1969 and 1972 and there are now about 8,100 of them.

Since the otters were first recovering in kelp forests along the open coast, the scientists who studied the animals assumed that this was their primary habitat. When they started turning up in Elkhorn Slough in the 1980s, they thought that was an anomaly, failing to realise that they were in fact reoccupying old habitats.

Archaeological and historical records indicate that otters were once abundant in California’s estuaries, prior to being driven to local extinction through over-hunting. “Scientists are subject to perception bias,” says Tim Tinker, a wildlife biologist at the University of California, Santa Cruz. “Estuaries were traditionally very important to otters. But we did not really appreciate them as such. The ecological effects of otters on the outer coast dominated our thinking.”

Estuaries were not even considered in the US fish and wildlife service’s plan for the recovery of the sea otter in California, listed as threatened under the US Endangered Species Act.

Anywhere sea otters are going, I can guarantee change is going to happen
Brent Hughes, biologist

Now, scientists and wildlife managers are turning to estuaries as potential places where sea otter numbers could grow. In the past decade, the expansion of sea otters on the California coast has been curbed unexpectedly by the presence of the great white sharks that are recovering from overfishing and by-catch, at the southern and northern edges of the otter range. Shark bites have become the primary source of otter mortality. “The population is constrained by a shark wall,” Tinker says.

Estuaries could provide otters with an important refuge from sharks and other unfavourable coast conditions, such as storms and warming events. A recent paper suggests that San Francisco Bay, California’s largest estuary, could support about 6,000 otters, more than double the current population. “Once fully recovered, between a quarter and one third of the entire population in California could be accounted for by otters living in estuaries,” Tinker says.

Scientists also believe that sea otters could be conservation allies, with their potential to help restore other polluted estuaries in California. “It is a two-way street,” Tinker says. “To have a resilient population of sea otters we may need them in estuaries but estuaries may also need sea otters.”

Seagrass ecosystems perform important ecological functions. They provide nursery habitat for young fish and invertebrates, and they protect shorelines from storms and waves. They control erosion by holding down and trapping sediment. Seagrass absorbs carbon from the atmosphere and buries it in its roots, acting as a carbon sink.

Hughes’ discovery of the positive impact that sea otters had on Elkhorn Slough’s seagrass made him wonder whether they could benefit other places. Still working in the slough, he observed that sea otters moved into the salt marsh portion of the estuary in 2012 and started having a positive influence on this fragile habitat. Before the otters’ arrival, numerous striped shore crabs were burrowing into the muddy banks and fed on the marsh roots, accelerating the erosion of the marsh. By eating the crabs, the otters are now helping make the salt marsh healthier, slowing down erosion, a discovery that could be significant for salt marshes elsewhere. “Salt marshes are one of those ecosystems that globally are in a state of decline. In California, we lost 90% of them,” says Hughes.

In south-east Alaska and British Columbia, scientists are studying other ways that otters may be beneficial to seagrass beds. “Anywhere sea otters are going, I can guarantee change is going to happen,” Hughes says.

But the long-term influence of these furry ecosystem engineers is not yet fully understood.

Sea otter recovery is different from the recovery of any other species because they have such disproportionally big effects on the ecosystem
Tim Tinker, wildlife biologist

For example, when sea otters look for clams to eat, they dig in the seagrass beds, leaving holes behind. “When you are watching otters digging for clams, you can see a cloud of sediment come up to the surface,” says Erin Foster, a marine ecologist studying the interactions between otters and seagrass at the Hakai Institute in British Columbia.

“It looks like a bombed-out landscape when you come across a fresh site where there has been recent digging,” adds Margot Hessing-Lewis, also a marine ecologist with the Hakai Institute.

Foster and Hessing-Lewis are investigating the possibility that when sea otters disturb the sediment they could be helping seagrass become more resilient to environmental changes by making the seagrass flower more often, potentially increasing the genetic diversity of the plants.

As scientists are still learning about the full impact of sea otters on different habitats, they wonder about assisting the growth of the population, especially in California where the shark predation is making it difficult for otters to expand into new areas. Elkhorn Slough was the first estuary in California recolonised by sea otters, a process that was greatly accelerated by the release in the slough of 37 otters that had been rescued and rehabilitated by the Monterey Bay Aquarium in the 2000s.

Future otter releases could be strategically used to help sea otter populations expand in other historic habitats, though it is not always without risk. Otters could be exposed to the threat of boat strikes, oil spills, human disturbances, and contamination from chemical pollutants.

The return of this top predator also comes at a cost to humans, since sea otters compete directly with shellfish fisheries which had developed in their absence. A recent study that analysed the costs and benefits linked to the reintroduction of sea otters to the west coast of Vancouver Island in British Columbia found the benefits – including increasing fish populations, carbon sequestration and ecotourism – outweighed the losses to invertebrate fisheries by seven times.

However, the benefits are not felt equally, especially among indigenous communities who rely on shellfish harvesting for food security.

“Sea otter recovery is different from the recovery of any other species because they have such disproportionally big effects on the ecosystem,” Tinker says. “For most depleted species you are just worried about the conservation of the species but with sea otters, you are thinking how the entire ecosystem is going to change when they recover.”

This article was first published by The Guardian on 14 August 2020. Lead Image: Sea otters eat 25% of their body weight each day to maintain their body heat.