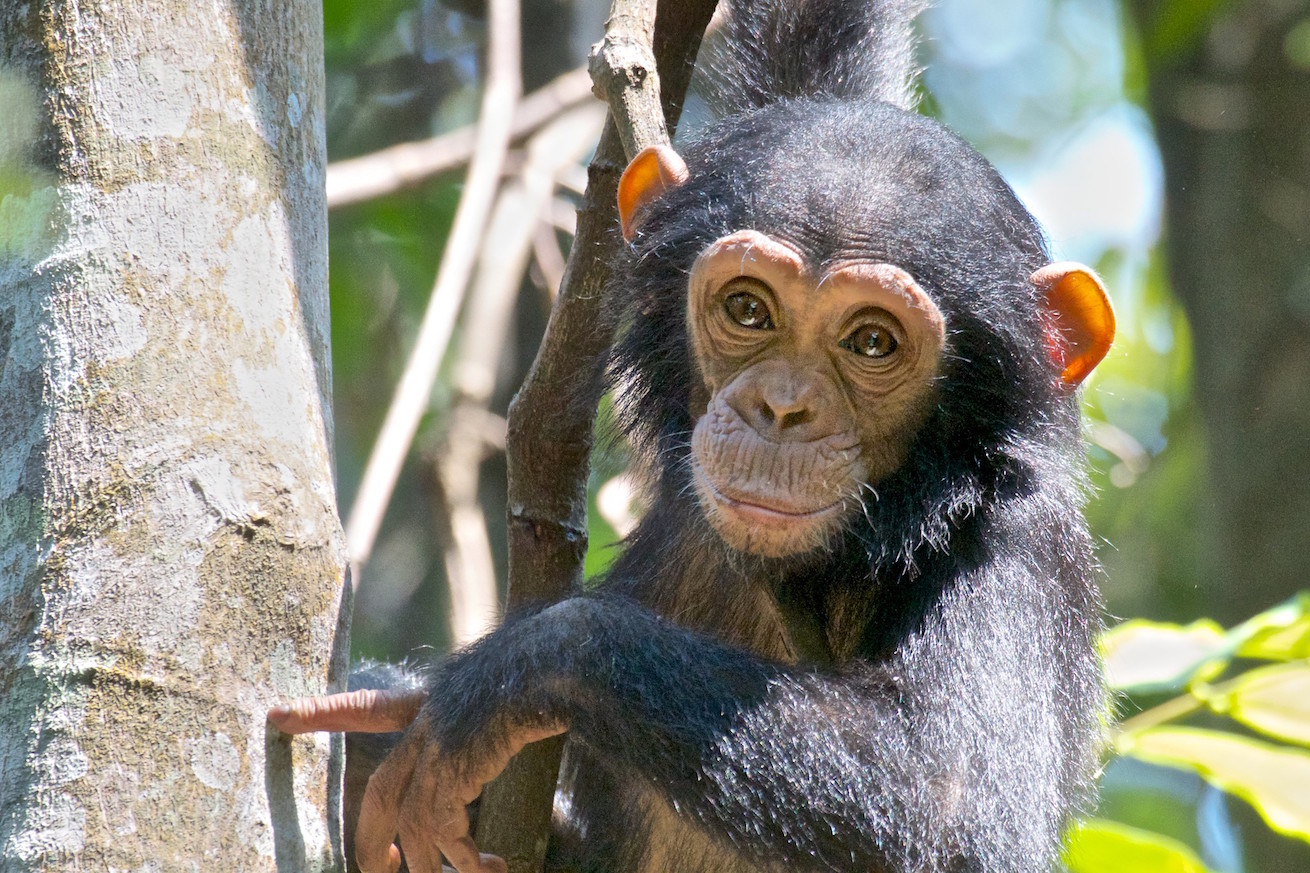 Experts estimate that nearly 2,000 chimpanzees may be lost to the wildlife trade each year.

Chimpanzees are currently listed as endangered by the IUCN (the western chimpanzee, one of four subspecies, is listed as critically endangered), and their numbers are still declining.

While chimpanzee conservation has many components, researchers say genetic studies are an increasingly important piece of the conservation puzzle.

Once taken from the wild, young chimpanzees that survive the trauma of capture are sold as pets or for entertainment and can end up almost anywhere; they’ve been intercepted by authorities in locations all over the globe.


“They’re confiscated in maybe Moscow, or San Francisco, or Hong Kong — it can be anywhere — and we don’t know where they came from,” says Peter Frandsen, a conservation genomics researcher at Copenhagen Zoo in Denmark.

That’s a problem when conservationists need to decide which country’s sanctuaries an animal should return to or where it could be safely reintroduced into the wild.

The answer may lie in the chimpanzees’ own genetic code.

A global team of researchers is working to determine how chimpanzee genetics vary based on where the animals come from.

By creating this genetic reference map, scientists hope to be able to determine the origins of confiscated chimpanzees as well as identify high-risk areas for wildlife trafficking.

A species in decline

Just a century ago, a million chimpanzees roamed the rainforests and grasslands of Africa. Now, fewer than 200,000 may be left in the wild, and conservationists fear that without widespread change these animals may go extinct in their natural habitats.

“Pretty much all of the big conservation threats are facing chimpanzees right now,” says Mimi Arandjelovic, a primatologist at the Max Planck Institute for Evolutionary Anthropology in Germany. “Logging, mining, all of the extractive industries that are going on in equatorial Africa … And then of course there’s the huge threat of disease … There’s the bushmeat trade, so people hunt and eat apes. And there’s the primate pet trade.”

One recently published study sheds new light on just how valuable genetic information could be in the conservation of this endangered species.

In this study, a group of researchers from Denmark, Spain, Russia and the U.K. analyzed nearly 60,000 ancestry-related genetic markers from captive-born and wild-born chimpanzees. In collaboration with dozens of zoos and sanctuaries across Europe and Africa, the researchers used hair samples to source DNA, a technique that is less invasive and stressful for animals than collecting blood.

Using the genetic data from wild-born chimpanzees whose birthplace was known, the researchers constructed a genetic reference map. They then compared this map with the DNA from chimpanzees who ended up in sanctuaries after being confiscated from illegal wildlife trafficking operations. In this way, researchers were able to estimate where the sanctuary chimpanzees had come from.

So just like popular DNA testing services for humans can tell us about our ancestry and origins, genetic information can reveal where chimpanzees come from.

Frandsen, one of the study authors, says learning where chimpanzees come from is important for many reasons.

For example, he says, genetic analysis provides essential information for captive-breeding programs. Even though chimpanzees may all look similar, there are actually four different accepted subspecies (and a fifth proposed subspecies), each with their own distinct range and unique genetic makeup. But there aren’t always records about where animals come from and which subspecies they are, which makes it difficult for captive-breeding programs to maintain the integrity of subspecies.

Frandsen says it’s important for captive-breeding programs to preserve these unique subspecies. “Modern zoos are often referred to as Noah’s Arks. You could call it a living museum sample,” he says. “So, we want to make sure that [zoo populations] resemble what you would find in the wild.”

That way, he says, if a subspecies goes extinct in the wild, it wouldn’t be lost altogether and eventually individuals of that subspecies could be reintroduced to the wild from these captive populations.

But genetic information may be even more valuable for combating animal trafficking.

Arandjelovic, who was not involved in the 2020 study by Frandsen and colleagues, says it’s unfortunately common for people to kill chimpanzee mothers for bushmeat and sell the babies as pets. Chimpanzees that are recovered from this wildlife trade can be candidates for reintroduction into the wild, so knowing where they came from is essential for deciding where they should be released.

Although Frandsen acknowledges that reintroduction can be challenging, especially as animals get older, he says it’s still very important. “They’re filling up in the sanctuaries, they don’t have enough space and one of the main goals is to reintroduce as many as they can,” he says. “The sanctuary shouldn’t be the endpoint for these chimpanzees if there’s an opportunity to relocate them.” Determining where an animal came from using genetic data may give it a better chance at a successful return to the wild.

It’s possible that genetic data could even help prevent chimpanzee trafficking altogether. Identifying where chimpanzees in the illegal pet trade have come from could reveal poaching hotspots, thus allowing countries to appropriately target anti-poaching efforts. This is especially important in places where conservation funding may be limited.

But Frandsen says they don’t yet have enough data to identify these high-risk areas. In this early proof-of-principle project, researchers analyzed just a few dozen animals that were rescued from the wildlife trade and ended up in sanctuaries. Frandsen says there are about 1,000 chimpanzees currently in African sanctuaries; the research team wants to expand their data collection to include these animals so that they can build a more accurate picture of poaching hotspots.

The more data the better

Future projects also include collecting more data from individuals born at known locations to build a more detailed genetic reference map, Frandsen says. The more detailed this map is, the more accurately researchers can determine where a trafficked animal has been taken from.

“For some of the subspecies, we have pretty good data from the wild,” Frandsen says. “But for some of the other subspecies we are still data-deficient. So right now, the plan is to fill those knowledge gaps on the map.”

Arandjelovic agrees that having accurate and detailed genetic reference maps is very important for determining the provenance of apes confiscated from the pet trade. She says the technique used in the present study — analyzing thousands of different markers — provides very detailed information about an individual. However, because of the cost and the specialized supplies needed to run this sort of analysis, it often cannot be done in the chimpanzee’s country of origin.

She says she wants to see if a reference map could be built using a simpler and cheaper technique that analyzes fewer locations in the genome. This technique would have the advantage of being more feasible to carry out in the countries where chimpanzees live. “It would be great if we didn’t have to export the samples, if we could do everything in-country,” she says. “That would be faster (we don’t have to deal with permits), but we can also start capacity-building and having people in the country of origin do that work instead of sending it to Europe or North America.” On the other hand, it’s not yet clear if this simpler technique would provide enough genetic information to create a useful reference map.

Frandsen and Arandjelovic agree that this is just the beginning for the application of genetic techniques to locate the origins of trafficked animals. The present study is a proof of concept, Frandsen says. “So, there’s a lot of work ahead to complete this project, but this is just for the chimpanzees,” he says. “It’s also really a blueprint for other conservation projects. There are a ton of other taxa that this could be applied to.”

This article by Hannah Thomasy was first published on Mongabay.com on 17 August 2020. Lead Image: A juvenile chimpanzee in the Mahale Mountains in Western Tanzania. Experts estimate that fewer than 200,000 chimpanzees remain in the wild. Image by Richard Toller via Flickr (CC BY-ND 2.0).