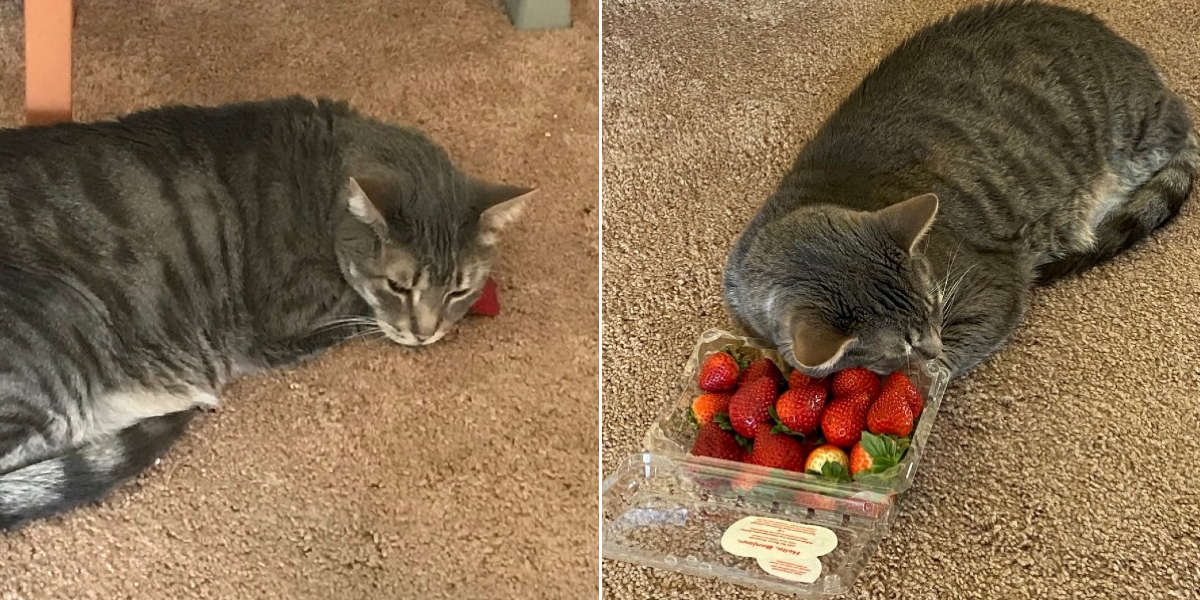 “When he gets tired he will sleep with the strawberries” 🐱❤️️🍓

Meet Remus — a 10-year-old tabby with an unusual passion for fruit.

When spring arrived this year, Carly Cox noticed that her curious cat was searching through the groceries more than usual. It took a while, but eventually, Cox discovered that it was a carton of strawberries that piqued Remus’ interest.

“I asked my sister (a veterinarian) if they were OK for him to have,” Cox told The Dodo. “She said yes, and he could not have been happier when I gave them to him!”

Before falling in love with strawberries, Remus enjoyed playing with his toys and activity tunnel. But once he discovered the bright red fruit, Remus became obsessed with them.

While strawberries shouldn’t be made part of a cat’s regular diet due to their high sugar content, that doesn’t seem to be a problem for Remus.

“Remus mostly plays with and snuggles the strawberries,” Cox said. “He doesn’t really try to eat them but will rub his face all over them and toss them around like toys.”

While cats can’t taste sweet and have trouble seeing the color red, some theorize that strawberries could be a distant relative of catnip, producing a similar psychoactive effect in cats.

“When he gets tired, he will also sleep with the strawberries,” Cox said. “I can’t quite figure out why he likes them so much, but I’m happy to be able to bring him joy with something so simple!”