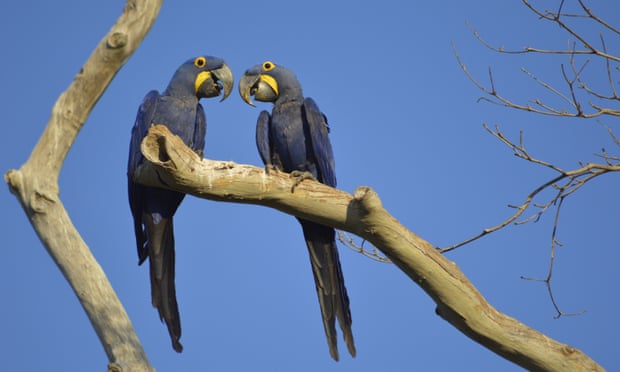 The world’s biggest refuge for endangered hyacinth macaws has been devastated by a historic fire in the Brazilian Pantanal.

The Pantanal, a vast tropical wetland straddling Brazil’s border with Bolivia and Paraguay, is currently suffering its worst fires in more than two decades, with nearly 12% of its vegetation reportedly already lost.

Last month Brazil’s space agency, Inpe, detected 1,684 fires in the region – the highest number in July since it began monitoring in 1998 and up from less than 500 in the same month last year. In the first half of August more than 3,000 fires have broken out.

The devastated areas include the Fazenda São Francisco do Perigara, a ranch in Mato Grosso state that has become a key sanctuary for the spectacular blue bird in recent years. Of the 6,500 hyacinth macaws living in the wild around the world, about 700 use its trees for nighttime shelter.

Ana Maria Barretto, one of the ranch’s owners, said that based on satellite images she believed at least 70% of the nearly 250 sq km property had been destroyed by the blaze, probably caused by humans and exacerbated by an unusually dry rainy season.

“This is an unprecedented drought. The impotence is so painful. It’s just awful, awful,” said Barretto.

Luciana Ferreira, a biologist who works with the local conservation group Instituto Arara Azul, visited the ranch last week and called the scene “frightening”. “There’s no doubt there will be many losses.”

Ranch workers and firefighters have managed to save one area where the birds sleep and some nests were spared. But the blaze remains out of control in the entire Pantanal region and is far from over. Traditionally more wildfires occur in September. Regular rainfall only returns in October.

The fires that take place in the Pantanal each year can be natural and are often small-scale and caused by lightning strikes. But experts say this year’s crisis appears to be predominantly manmade: deliberately lit fires intended to clear land for cattle ranching or farming.

The environmentalist Carlos Rittl said the unusually dry conditions in the Pantanal had played a major role in allowing such fires to spread. But he also believed President Jair Bolsonaro’s hostility to the environment had contributed by convincing those setting the fires they were unlikely to be pursued or caught.

“The Bolsonaro administration is a key factor in this,” said Rittl, a senior fellow at Germany’s Institute for Advanced Sustainability Studies.

During a visit to São Francisco do Perigara, the Guardian witnessed chilling scenes of destruction: entire swaths of the world’s biggest tropical wetland had been left a barren landscape of dried-up lakes, smoke and smouldering logs.

The loss of wildlife has been visibly immense. In one field a troop of 10 dead capuchin monkeys – one of the most intelligent primates on Earth – had been charred by the flames. A few metres away lay a dead deer. A bush dog, exhausted but still alive, scarcely had the strength to flee the ranch’s visitors. In a nearby pasture lay five incinerated snakes.

There have yet to be reports of dead hyacinth macaws, which are called araras-azuis (blue macaws) in Portuguese. But Neiva Guedes, the president of the Instituto Arara Azul, the Pantanal’s most important wildlife protection group, said the birds were now appearing in smaller numbers around the ranch’s main farmhouse.

“It’s just devastating to think that this is all connected to something much greater that the world is going through,” Barretto said.

“If we don’t start to act more sustainably, I really feel for future generations. What will they have to live through?”