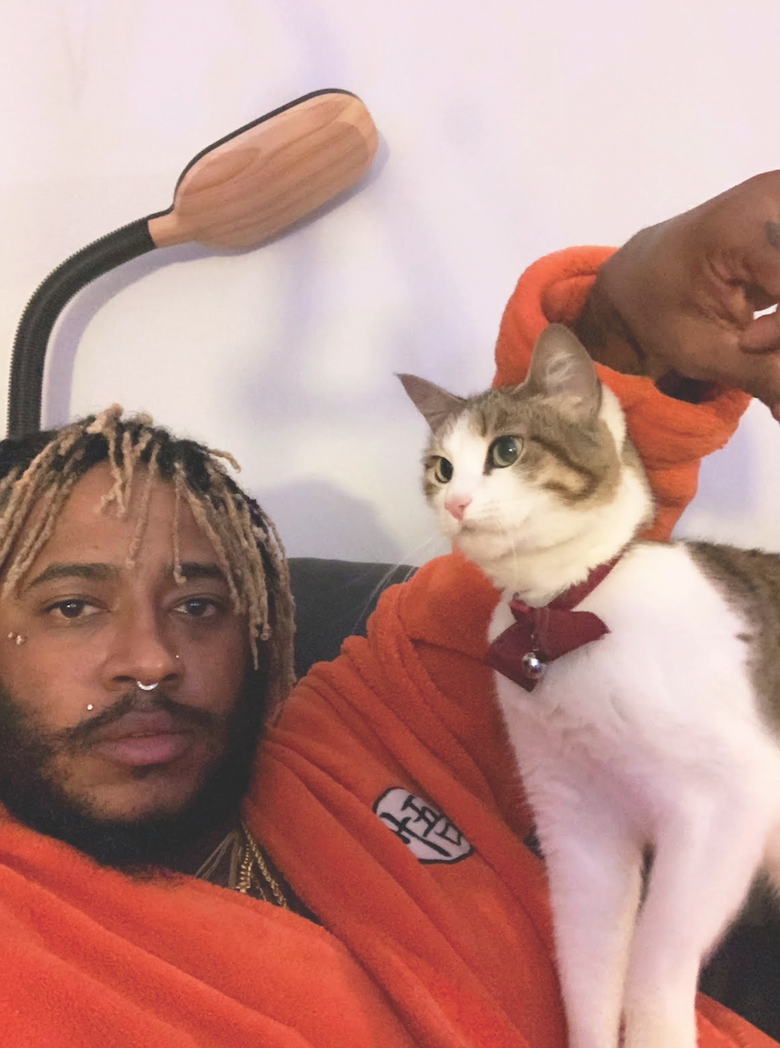 “I like to try and make eye contact with my cat when she poops,” says Thundercat, the Los Angeles-based Grammy-winning bass maestro, modern falsetto soul singer and proud feline fancier. Lounging in a hotel room in Manhattan, Thundercat is ostensibly on the road to promote his latest funk-fueled album, It Is What It Is, but he’s just as happy to drift off into anecdotes about his rescue tabby, Tron.

“I’ve dressed her up many times and bought her a Kobe Bryant basketball jersey, which she can keep on for weeks at a time,” Thundercat continues. At the same time, he scrolls through photos of Tron in her various outfits on his phone and adds that he and Tron have matching costumes inspired by the Dragon Ball Z anime show.

Thundercat’s mainstream profile experienced a major boost in 2016 when he snagged a Grammy for his work on rapper Kendrick Lamar’s These Walls track. The flamboyant bass player has also worked with Snoop Dogg and neo-soul singer Erykah Badu. But it’s the feline form that’s played a cult role in Thundercat’s musical rise. An early breakthrough came in 2014 when he released Tron Song, a lilting ode to his cat that included the lyrics, “Don’t you know you rock my world? / Don’t you ever leave me Turbo Tron / Don’t ever wonder where I’m going.” The track was accompanied by a video directed by the comedian Eric Andre that featured Thundercat frolicking in an oversized litter box. More recently, on Dragonball Durag from Thundercat’s latest album, he tells a romantic tryst, “I may be covered in cat hair, but I still smell good,” over salubrious bass and a honeyed melody.

“You should just let the cat hair happen,” offers Thundercat when asked how to deal with the pesky issue of feline fur making its way onto your clothes. “Maybe you can have a nice lint roller, but it’s more important to check your clothes for cat spray. Oddly enough, I like the cat spray smell. You can tell when somebody has a cat: Every now and then there’s a rehearsal and I’m like [pretends to smell the air], ‘Hey, how’s Hamilton the cat?’”

Picking up the backstory of his own feline, Thundercat says that Tron came into his life when a neighbor was moving and handed a kitten over to him. “She was palm-sized,” he recalls. “It was a gift. She’s never stopped being a gift ever since.” After a pause he adds, “I think Tron is actually my girlfriend. She’s great to live with, very domestic, very beautiful…

Read Next: Spotify Has a Playlist for Your Cat