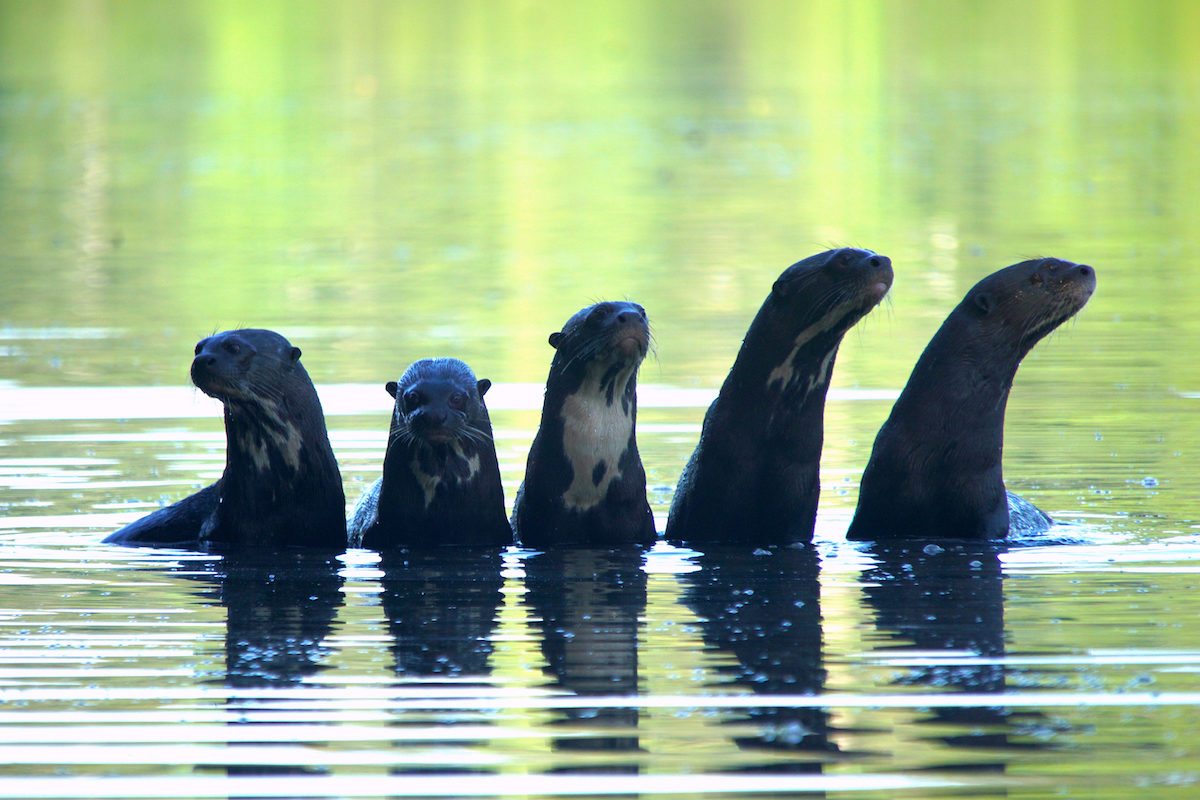 The Bolivian government’s decision to close all national parks in response to the COVID-19 pandemic in mid-March was supposed to stop the spread of the coronavirus. But it’s also had unwanted consequences for the wildlife and for the financial viability of the very parks themselves, not just in Bolivia but across Latin America.

Within days of the March 16 announcement of the closure of all 22 protected areas across Bolivia, authorities seized a boat in Madidi National Park. On board, they found a shipment of fish caught illegally in the protected area and a tapir (Tapirus terrestrial), a species categorized as vulnerable on the IUCN Red List.

Uzquiano said he feared this necessary closure was not enough to stop the criminal groups that profit from the illegal sale of wild plants and animals taken from within protected natural areas. The closure of protected areas by the Bolivian government is similar to measures adopted by most countries in the region to prevent the spread of COVID-19.

“The boat was intercepted. We are concerned that people from the surrounding communities may enter the national park to hunt and fish to supply their family with food,” said Marco Uzquiano, the director of Madidi National Park.

Besides illegal activities, parks in Bolivia and elsewhere are suffering from a cut in revenue from tourist visits; in some countries, visitor receipts account for up to 40% of the parks’ annual budget. There is also uncertainty about the future of projects developed by Indigenous communities in both protected areas and buffer zones.

Mongabay spoke with several experts about the issue and the fact that these protected places, which are visited by thousands of tourists each year, are now getting a break from people. The Galápagos Islands off Ecuador, the Eduardo Avaroa reserve in Bolivia, and Machu Picchu and Manú in Peru are some of the places that are experiencing a respite from human pressure.

Madidi is not the only park in Bolivia that has reported problems. Carrasco National Park in Cochabamba department was the target of an unexpected invasion by would-be land grabbers. “At least 200 invaders broke past the checkpoint’s bars and trespassed,” said Maikol Melgar, the executive director of Bolivia’s National Protected Areas Service (SERNAP). “The rangers were unable to stop them. With the authorities’ support, we managed to evacuate them. Only a small number of people remained.”

Melgar said the group intended to settle inside the protected area, but authorities managed to identify the vehicles they used and some of the invaders, and have used that information to file a complaint.

Melgar said there are only 300 park rangers overseeing surveillance of 22 protected natural areas throughout the country. Around 200 rangers were working inside the protected areas when the closure was ordered, and have remained quarantined there. The rest will remain in their homes for the duration of the closure.

For now, rangers only carry out patrols in emergencies. Otherwise, they operate checkpoints.

Melgar said he’s worried that the closure of protected areas could have an economic impact. He said revenue from tourist visits accounts for between 35% and 40% of the annual budget. “We still cannot quantify the impact because the duration of the closure is still uncertain, it can be a month, three months, or the whole year.”

Bolivia’s most-visited protected area, Eduardo Avaroa Andean Fauna National Park, on the border with Argentina, generated about $290,000 a month before the pandemic.

According to Melgar, as the public treasury covers the needs of the outstanding personnel within the reserves, the situation is not yet critical from a financial standpoint. For this reason, they have not “thought about reducing personnel,” he added.

Madidi National Park’s Uzquiano said the ecotourism initiatives of communities living within the parks, as well as other community projects, will be impacted because they won’t generate income. “The Indigenous population will seek means to subsist. People will enter the park to carry out illegal activities,” he said.

The government has not yet proposed any solutions.

Across the border, the Peruvian Service for Natural Protected Areas (SERNANP) has also ordered park rangers to remain where they are following President Martín Vizcarra’s announcement of quarantine measures. “Some were at home and others were at checkpoints,” said Werner Aroche, a ranger at Cerros de Amotape National Park in Peru and the South American representative to the International Ranger Federation (IRF).

Aroche said the park rangers who remained within protected areas should stay at the checkpoints without going on patrols. “Until now we haven’t had any report of rangers presenting COVID-19 symptoms. In total, we are 715 park rangers in the 75 protected natural areas throughout Peru, but not all of us are on duty.”

Regarding illegal activities, Aroche said residents living in the buffer zones of reserves in Tumbes department are monitoring the entrances to the parks and have closed roads and other points of access.

Pedro Gamboa, the director of SERNANP, said that of the 715 park rangers in Peru, 420 are at their checkpoints. “We have postponed the rotations and we are sending them fuel and supplies. Due to immobility, we haven’t had reports of illegal activities.”

Gamboa said special patrols will only be carried out when illegal activity is detected. For this, there is permanent communication with the Ministry of the Environment’s forest program, which will give alerts about any change in forest cover in protected areas. He added that in places that have police and military support, like Machu Picchu, Alto Mayo and Tambopata, coordination is key to dealing with any of these incidents.

On the economic impact that the suspension of activities may have on national parks, Gamboa said funding comes directly from the public treasury and through contributions from international organizations. Revenue from tourism represents only 30% of the total budget of about $25.7 million a year.

“This year’s budget is already approved, but next year it will be different,” Gamboa said. He added there are no plans to cut staff. “Our concern has been to cover personnel services. We have never made reductions due to lack of budget.”

The suspension of entry into Peru’s national parks followed from the banning of international flights and declaration of a national quarantine on March 16.

Of the 62 protected areas in Colombia that fall under the National System of Protected Areas, 25 engaged in ecotourism before the pandemic. However, according to the national parks authority, these areas do not depend on the money that comes from ecotourism.

Regarding the situation of park rangers, the park authority indicates it has reduced the number of personnel at the control posts of protected areas.

Jorge Parra, the protected areas coordinator at the Wildlife Conservation Society Colombia, said he’s concerned about the presence of illegal armed groups within national parks because they could take advantage of this emergency and easily enter these places. “Before the coronavirus arose, there were reports of the presence of armed groups, and several teams from national parks had to leave the Amazon.”

Parra said he’s also concerned about what will happen to the productive and cooperative activities that take place around the protected areas. “It is a direct impact because the majority of Colombia’s protected areas have cooperation projects going on, as well as research projects.”

Despite the pandemic, staff in Ecuador’s protected areas continue working to tackle any illegal activities that may arise. However, they are prioritizing the most urgent tasks and taking preventive measures against COVID-19, the Ministry of Environment told Mongabay in an email.

Of the 59 protected natural areas in Ecuador, 33 were engaged in tourism before the pandemic. According to the ministry, their sustainability will not be affected by their closure, since they all rely on the state budget and the Protected Areas Fund (FAP).

Tarsicio Granizo, the WWF Ecuador director, said Galápagos National Park will suffer the greatest economic impact from the lack of tourism. This marine protected area is the only one that charges an entry fee and includes that contribution in its budget. “The budget of Galápagos National Park will be affected because part of it comes from its entry admission,” he said.

Granizo also said there’s a high risk of crime and illegal activities in protected areas during this period. “It is especially worrying that illegal mining activities can take advantage of the emergency in areas such as Cayambe-Coca, Cotacachi-Cayapas, Podocarpus, among others. I know that park rangers are working and patrolling the areas. They are part of the group of anonymous heroes who work while we are isolated.”

Beyond economic problems and threats, the experts Mongabay interviewed said the coronavirus crisis allowed protected areas to rest, especially those ecosystems most frequented by tourists.

“Nature returns to take its place as human activity shifts,” said Iván Arnold, the director of Bolivia’s Fundación Nativa, on the halt in activities. He called the respite an “irreplaceable and once-in-a-lifetime opportunity to look at the changes that will occur in nature.”

Arnold said this period can be treated as an experiment to assess what happens as protected natural areas across Latin America and the world shut down to human activity. “Sometimes nature gives us unthinkable lessons and this is one of them. A lesson and a call to change our way of acting. If we do not acknowledge that, other situations like this will arise,” he added, referring to the wildlife origins of the coronavirus.

José Luis Mena, the director of the species initiative by WCS Peru, called the closure of national parks a truce and an opportunity to assess the state of biodiversity in these areas while planning for what will happen when tourism resumes. “It is an unbeatable situation to be able to collect data based on a good methodology and then compare [the results] with the [ones obtained when the] influx of tourism [restarts],” he said.

Mena also pointed to a possible reduction in the trafficking of species in response to the closure of Asian markets. In China, for example, the government has temporarily banned the sale of wild animals.

Aroche, the park ranger from Tumbes, Peru, said this is an opportunity to observe from nature’s front line the changes that will happen in these protected areas free of human pressure. He added that in the first two weeks that the national parks in Peru were closed, wild animals were reported in areas where they were previously not sighted. “More species are seen, even on the roads, they go out to the trails. In Tumbes, white-tailed deer, pumas and birds that were not seen before in these areas have been seen,” he said.

For Parra, from WCS Colombia, the national parks are very important as they play a central role in maintaining local biodiversity. “It is a good strategy to keep national parks in their natural state to avoid contact with biological agents such as viruses.”

Parra added that they have to promote ways to prevent future disease outbreaks that stem from wildlife. “Coronaviruses are in all species, but each one has its [host] fauna. When we misuse wild animals, things like what we are experiencing right now occurs. Maintaining national parks guarantee that [viruses] don’t get out.”

This article by Yvette Sierra Praeli and translated by Romina was first published on Mongabay.com on 24 August 2020. Lead Image: River otters in Manú National Park, Peru. Image by Adi Barocas.