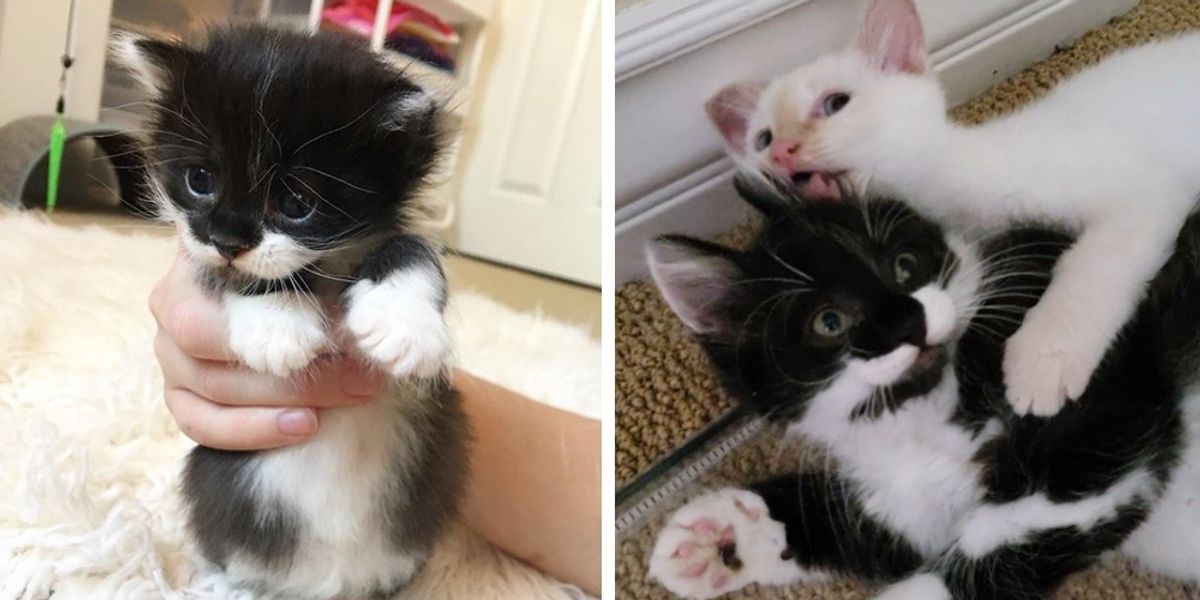 A tuxedo cat who was found in a yard, befriended another kitten rescued from the same fate.

A kitten was found all alone in the middle of a yard and brought to Wrenn Rescues (in Southern California) for a chance at a better life. It’s likely that the cat mom was moving her litter and somehow left this little guy behind.

“He was watched for the entire day, but mama never returned for him, and no other babies were discovered,” Ashley Kelley, a foster volunteer of Wrenn Rescues, shared. “With coyotes around, it wasn’t safe to leave him overnight, so he was brought to me.”

The tuxedo whom they named Dali, immediately latched onto his bottle and suckled down the kitten formula like a champ. Once he got a full belly, he would curl up in his foster mom’s hand and purr up a storm.

Over the next few days, his ears perked up, his coat fluffed up, and he grew a chonky, cute belly.

Dali is equipped with a purr motor that doesn’t seem to switch off. As soon as Ashley walked into the room, the happy-go-lucky kitty would seek attention and pets.

“I’ve never ever had a more content and quiet, lazy neonate. I had to encourage him to move around after his feedings. He’d rather curl up and go back to sleep, purring on my lap.”

Knowing how much a friend could benefit a kitten’s development, the rescue decided to pair him up with another singleton.

Right before Dali’s arrival, another kitten named Remy was found by himself without a mom. Just like the tuxedo kitten, he was discovered in someone’s yard, in need of rescue. Jen Marder, a foster volunteer of Wrenn Rescues, didn’t hesitate to take him in.

Remy was spicy and sassy and wouldn’t hold back on his many complaints. “After two baths to get rid of those pesky fleas, we were starting to become friends,” Jen said.

He warmed up to his foster mom and grew to enjoy pets and belly rubs. For the first couple of weeks, Jen nursed him back to health and gave him a heartbeat faux-mama to keep him company, but little Remy demanded more.

If Remy wants something, he sets his mind to it. The little guy wouldn’t let his foster mom leave the room without some extra cuddle time. He’d escape his nest using all his might and wouldn’t take no for an answer.

He is a busy body, constantly moving around.

“He liked to wrestle with his bottle and do pull-ups on it before finally eating. He is a particular, smart and goofy boy.”

Remy was chock-full of unbridled energy and desperately needed a friend to play with. Once he was medically clear, Dali, the laid-back kitty, came to join him at his foster home. It was love at first sight.

Remy greeted his new friend by hopping around Dali and gently patting his face. The tuxedo boy wasn’t sure how to handle all that energy but was glad to have a buddy to play with. In no time, they started running around, wrestling and cuddling with each other.

Watch the two kittens in this cute video:

While Dali enjoyed chilling on a warm lap, Remy constantly juggled between snuggling with his people and getting Dali to play with him.

“He loves getting hugs from his human, and he loves giving kisses. But he has very important cat business to attend to, so then he runs off and plays and chases Dali,” Jen said. “Dali tries so hard to keep up with Remy. It is hard work moving all that floof and chonk around!”

Remy couldn’t wait his turn for the bottle. He tried to sneak a snack while his little brother gobbled down the food.

Despite a rough beginning, the two buddies found each other and became inseparable friends. Last weekend, they had their dream come true when they went to their forever home together.

“These boys were such a joy, and I am going to miss them, but they are going to have the absolute best lives,” Jen added.

The kittens, now renamed Charlie (Dali) and Arthur (Remy), have settled into their new abode wonderfully. Charlie follows his brother’s lead as they explore every nook and cranny and enjoy their VIP life to the fullest.

“They are doing great in their new home and have their parents wrapped around their paws already!”

Related story: Kitten with 3 Paws Finds Perfect Friend to Help Him Get Better